The Green Party blasted Governor Cuomo and state lawmakers for their middle of the night votes to continue gerrymandering of state legislative districts in exchange for passing Cuomo's assault on the pension benefits of government workers.

The Greens also opposed the deal on casino gambling and the DNA database.

"Cuomo's push on on Tier VI is just the latest chapter in his game of class warfare, attacking public employees while refusing to close corporate tax loopholes or make his wealthy campaign contributors pay their fair share of taxes. The real bottom line in the pension fight was to slash retirement benefits for the one segment of our society that still is protected by pensions. If he wants to help local governments and taxpayers, he should tax Wall Street to clean up the mess they created,"said Howie Hawkins, Green Party co-chair. 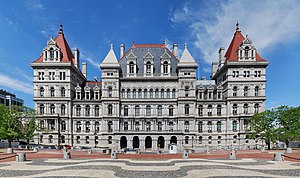 "The legislature passed yet another gerrymandering plan in the middle of the night to protect incumbents and thwart democracy in NY. Cuomo tries to hide his reneging on a campaign promise for independent redistricting by shamefully peddling a flawed constitutional amendment that ten years from now will still leave the two major parties drawing the district lines. The Green Party has a proposal: let's elect half the legislature based on a statewide proportional representation democratic vote for parties, and the other half based on districts drawn up by an independent committee like Iowa's that is not beholden to either the Democrats or Republicans, and not to the Executive or Legislative branches either," said Peter LaVenia, the other Green party co-chair.

"Casino gambling does nothing to add any value to the economy. It's a kickback scheme for casino operators and a regressive tax on workers. Why isn't the Legislature voting on providing funds for a Green Jobs program that could have lasting benefits for New York State's economy? Instead of casinos in the Catskills, how about wind farms and solar power plants? Public works to retrofit millions of homes and make them energy efficient? Stop rebating the $16 billion from the stock transfer tax to Wall Street speculators and invest in rebuilding New York. Casino gambling addresses none of these issues," added LaVenia.

"The DNA database Cuomo is pushing for would include all people convicted of crimes, not just felons. This is a scary encroachment on our right to privacy as Americans, which has been eroded during the last ten years of the Bush & Obama regimes. Cuomo and the legislature are poised to hand a largely unaccountable bureaucracy even more power to harass citizens and profile them," stated Michael O'Neill , Secretary of the State Green Party.