The Green Party at the Rally Against the Wars 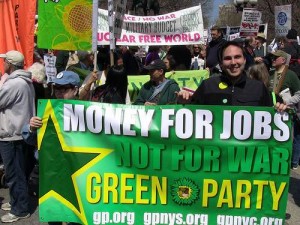 Green Party says, "Money for Jobs, not for War"

The Green Party joined today with hundreds of organizations at the United National Anti-War Coalition rally in NYC to call for a halt to war and to use military funds for public jobs, education and a rapid transition to carbon-free clean energy.

The Greens called for closing all nuclear power plants as an environmental and financial threat, starting with the immediate closure of Indian Point.

The Green Party opposes continuing bipartisan efforts led by the Obama administration to harass Muslims at home and abroad and to curtail labor and civil rights.

The Green Party supports immediate withdrawal of American troops and bombs from Iraq, Afghanistan and Libya and an end to the illegal occupation of Palestine. We must slash our military budget, greater than the rest of the world combined, to free up funds to rebuild America based on economic justice and a healthly environment.

The US bombing of Libya is the latest war for oil. The two corporate parties promote an energy policy based on dirty and dangerous fuel -- oil, coal, nuclear and hydro-fracking for natural gas. The Green Party believes that an effective foreign policy is based on improving the quality of life for all people. As the most powerful nation in the world, the U.S. must put human rights ahead of turning every country into another market to be exploited by big business.

The Green Party views April 9th as part of the growing worldwide struggle for freedom, whether in the streets of North Africa or in the state houses of Wisconsin and Albany.

The Democrat and Republican Parties are competing to launch the most brutal attacks against workers, people of color, Muslims and the poor. They have manipulated our collective grief since 9/11 to launch endless wars for greater corporate power and concentration of wealth. The American people need to follow the example of our brothers and sisters in Egypt and South America and peacefully rise up to demand a just and environmentally healthy society here at home.
Green_party_of_nys Nonviolence news
Do you like this post?
Tweet