I remember Earth Day's beginning. Will you fight for its future? 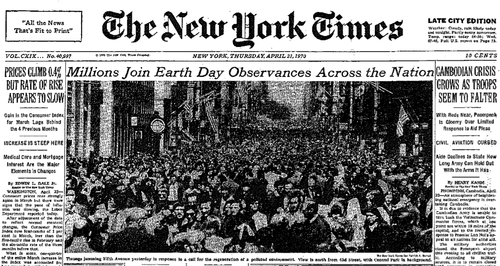 I was a young teenager when the first Earth Day was celebrated in NYC over 40 years ago. It was a day of fun, excitement and a sense of purpose among 20 million people from all over the city and beyond. It helped launch the modern environmental movement and was soon followed by legislation that established protections for our air, water and land. But the millions who pledged a commitment to Mother Earth went unheeded by the 1% and their paid-off Democratic and Republican politicians, who allowed natural resources to be extracted at a devastating rate while deadly carbon and methane spewed into the atmosphere.

Now that I am a parent of a young teenager myself, I see that his generation (and the generations to come) are growing up on an increasingly toxic planet. This Earth Day, today, world leaders are gathering at the United Nations to sign what amounts to a death sentence for countless future inhabitants of this Earth: the Paris Climate Accord.

We need a binding, global agreement, not a “voluntary pledge” of emissions reductions that will still increase warming to a disastrous 3° Celsius. Once again, the United States has failed to take the lead on curtailing global warming, along with other major polluters like China. The agreement provides an insufficient amount of funding to help tens of millions of climate refugees suffering right now.

The Green Party demands a Green New Deal to heal our ailing planet while fixing a perverse and self-destructive economy. The Green New Deal will create 20 million new jobs by moving to public transit, conservation, and 100% clean, renewable power by 2030.

But in order to get renewable power we need people power. Drastic intervention to stop catastrophic climate change will require drastic action from millions of us to overcome the elite who worship profit growth at any cost. On this Earth Day, let us remember the millions who have waged this fight before us and honor them through a commitment to building the people power necessary to actually change this world–for the better.

That means learning and teaching to others strategies and tools for building power and real victories for the 99% and Mother Earth. It means sharp analysis to cut through fake solutions paraded in front of us time and again, and boldness to demand real change in a way that cannot be ignored. We are working toward that every day in the Green Party of New York, and that’s why I am asking you to please make a donation to this member-owned, member-run party.

Through your contributions, we are planning a convention in June to vote for our presidential nominee, celebrate local candidates for office and host workshops to hone Green organizing skills. We are hosting a radically participatory platform renewal process, welcoming contributions and discussion from Greens across the state. We are representing Green Party values in force at the Left Forum for the 6th year running, where our allies need to hear about the primacy of political independence to get the changes we need. And we are mobilizing to gather in Albany on May 14 to break free from fossil fuels.

There are many ways to give:

One last thing: there has been a lot of discussion this week about the need for democratic reforms in our elections. We invite you to check out this Capital Tonight interview with my fellow Co-Chair Peter LaVenia , who discussed how some real reforms to build multi-party democracy would empower voters who are disenfranchised as a matter of routine.

Rapidly responding to an often cynical news environment with a radical message takes time and knowledge. With your support, we can do this more often locally, statewide and beyond.

Thank you for taking a moment to think about Earth Day with me, and for your continued support of our party!