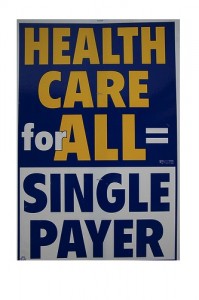 The Green Party of New York State decries the “historic” deal reached in the Senate as historic only in the sense of its betrayal of American working people, women, and democracy. Green Party members across the United States still demand single-payer, universal health care, the most efficient and proven plan to cover all citizens. The plan on the table in the Senate has had even the most basic “public option” removed for the benefit of the insurance companies and the “Blue Dog” Democrats, with the complicity of so-called progressive Senators like Russ Feingold and Bernie Sanders. Sen. Benjamin Nelson managed to extort a compromise that sacrificed women’s rights as well and privileges for Nebraska in terms of Medicaid payments that no other state will receive.

“The Senate bill represents the worst of all possible worlds: a mandate for everyone to purchase private insurance, national non-profit private plans that will absorb the most costly patients unwanted by private insurance, massive subsidies to the insurance industry, and a complete evisceration of a woman’s right to an abortion under her health-care plan. To call this a victory even by the standards of what the weakest of so-called progressives wanted during the summer is a farce; it is complete capitulation to the conservatives in the Senate and the insurance industry’s campaign donations and lobbying,” said Matt Funiciello, owner of Rock Hill Bakehouse and Green Party activist.

“America has become a failed state, with a few Senators from states with virtually none of the population twisting and destroying the chance for real health care reform for the rest of the nation. Senator Nelson received a promise from Harry Reid that the federal government would pay for all Medicaid expansion in Nebraska in perpetuity, something no other state is promised. Senators Lieberman, Baucus, and the other Senate “moderates” were able to craft a bill with the blessing of the insurance industry and no opposition from the White House, and so-called progressives like Feingold and Sanders let it happen. The Green Party has been arguing for years that we need one person, one vote, which would mean abolition of the Senate and unicameral Congress, and expansion of grassroots democratic control. If this doesn’t show the need for campaign finance reform, nothing will,” said Peter LaVenia, co-chair of the New York State Green Party.”

“What’s America’s breaking point? The Congressional Democratic proposals were bad for health care reform from the start because they sought to expand the role of private insurance companies when our present system of insurance is the reason why we pay so much money for the worst health care system among the world's industrial countries. The Senate bill became so bad that even mainstream Democratic groups and individuals such as Moveon.org, Howard Dean and the AFL-CIO could no longer go along with the fraud. Rather than mandating that everyone buy health insurance, we need to eliminate health insurance companies from our health care system. We need a program that saves money while guaranteeing quality health care to every American,” stated David Doonan, mayor of Greenwich, NY.
Green_party_of_nys Press_releases Social_&_economic_justice news
Do you like this post?
Tweet