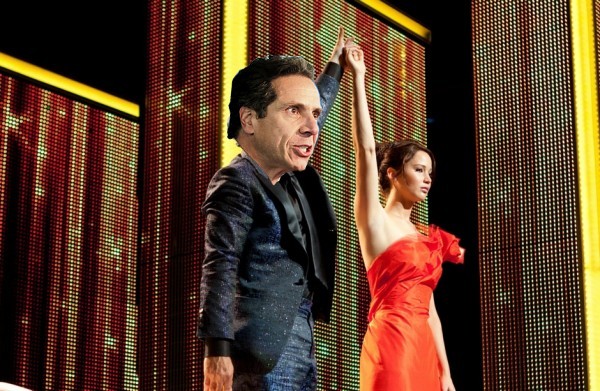 Kids from rich and poor districts compete against each other in a high-stakes game designed to reinforce a rigid class system. The plot to Suzanne Collins' smash hit The Hunger Games, or Governor Andrew Cuomo's new scheme for $200 million in "competitive school grants"?

Children apparently do not feel sufficiently pressured by the current battery of standardized tests, since filling in the right bubbles only determines their own futures. No...that is so early 2000s. Now kids can walk into a classroom knowing that the survival of their very community depends on how they perform in a high-stakes testing system that has been thoroughly debunked.

When economically suffering communities from Binghamton to Brooklyn have already been laying off swathes of veteran teachers, it's hard to imagine how Governor Cuomo thinks pinning future funding to test scores is fair, humane or even sane. But the opportunities presented by masses of children competing for cash prizes in an era of austerity makes things clear.

For instance, it's obvious now that Mayor Michael Bloomberg's hire of glossy magazine maven Cathie Black as Chancellor of New York City Schools was an early attempt to cast his own Effie Trinket. And think of the revenue streams NY State could pull out of this racket, like a reality TV show depicting the progress, heartbreak and, of course, meltdowns of students and teachers during the lead-up to the big test day!

Obviously, tying school funding to mere academic performance will soon lose its excitement. In years ahead, New York students will compete for grants through traditional school sports like football and wrestling, followed by the introduction of a mixed martial arts tournament, until finally realizing Cuomo's dream of a fully armed, child-on-child deathmatch broadcast live from an undisclosed location in the Adirondacks.

A Green New Deal, funded by taxing New York state's corporations and wealthiest at their fair share, could ensure a quality education for every New Yorker up to the college level. Cuomo's competition, by favoring affluent districts, will perpetuate unjust and unequal access and fail to prepare New York for the Green economy necessary to battle the ongoing environmental and unemployment crises.

It is cruel to pit children against each other and turn a human right into a winners-and-losers battle. Confront Cuomo at every opportunity with quotes and imagery from The Hunger Games series to unveil the brutality of the game he wants to play with the future of your children. Young people, who know the books well, will understand immediately that this scheme makes sacrifices of them to preserve an unfair system.

Finally, the competitive school grants plan is further proof that the Democratic Party leadership has embraced brutal principles of class warfare from above with imaginative enthusiasm. New York must build the Green Party to oppose the schemes of the 1% and create a Green New Deal for all. But until that day, may the odds be ever in your favor!