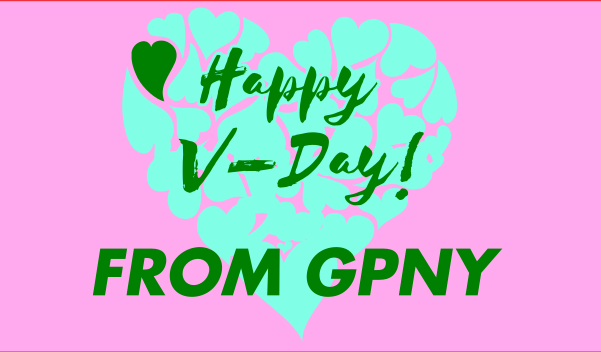 Happy V-Day! Today marks the 20th Anniversary of feminist Eve Ensler's The Vagina Monologues and claiming Valentine's Day as a V-day of Action to end violence against all women, everywhere.

Feminism is one of the Key Values of the Green Party and we are dedicated to building gender equity in every aspect of GPNY.

On this day we remember all who women who have suffered under patriarchy, homophobia, racism and economic exploitation.

Whether in the home or workplace: WE SAY NO MORE. We must all band together to abolish oppression in every form.

Osgood and her sister (a grandmother) were among 10 environmental and human rights activists known as the "Monsanto 10" arrested in the early morning last spring when they tried to block Monsanto staffers arriving to work at the 90,000-square-foot research facility in Yolo County. The protest was one of more than 400 "Anti-Monsanto/Anti-GMO" demonstrations held worldwide in 47 states and 52 countries on six continents.

Debate and research over the safety of glyphosate, Monsanto's first branded herbicide, continues in the scientific world while human rights activists and many in the organic farming movement maintain Monsanto products like Round Up Ready seed are unsafe to humans and a threat to the environment.

The Trump administration has threatened to de-fund the World Health Organization because the WHO has deemed glyphosate "probably" carcinogenic.