From the Syracuse Post-Standard: 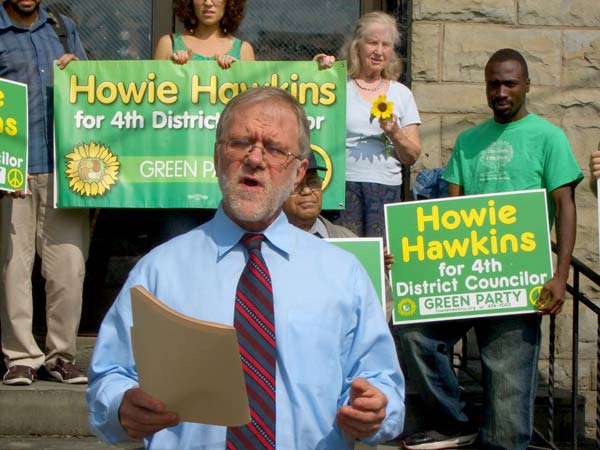 The race to fill the Syracuse

Hawkins, who works for UPS, has run more than a dozen times, for everything from governor and senator to mayor and councilor. He advocates for public power in the city to generate jobs and energy savings; a municipal development bank to provide training grants and job-ready employees for local enterprises like grocery, hardware and clothing stores in underserved areas; fully-funded schools and city services through tax reforms that include a city income or commuter tax; enforcement of the city’s living wage ordinance, combined with a “community hiring hall” to increase minority employment in city contracts.

Bey runs a small publishing company. During his three years as regional coordinator for the New York State Senate Democratic Conference, he worked to ban embalming fluid that is used as a cheap and dangerous intoxicant, and mediate between property owners and neighborhood preservation advocates around Syracuse University. He says if elected, he would hold monthly meetings in each of his district’s eight wards. He stresses the need for compromise and seeking common ground on contentious issues.

Addressing the frosty relations between councilors and the mayor, Hawkins says if he couldn’t win over the mayor, he would try to build a veto-proof majority on the council. His progressive ideas, common-sense approach and undaunted quest for an opportunity to serve make him the stronger candidate.