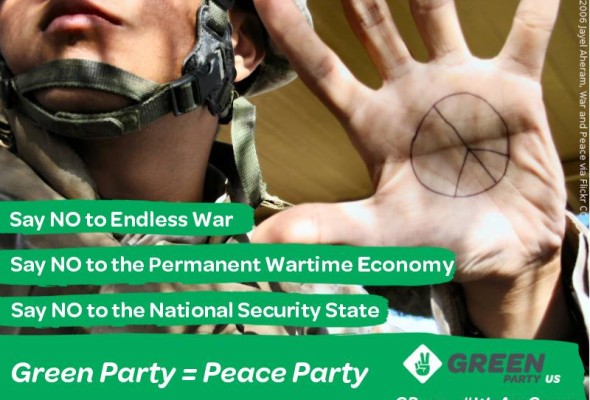 On the 14th anniversary of the September 11th attacks, The Green Party of NYS remembers the victims and their families who have suffered a tragic loss on this day. The bravery and compassion of first responders, trade unionists, health care workers, community activists and ordinary citizens on September 11th and the days and weeks to follow brought NYC and the country together.

Unfortunately, our government used this awful tragedy to catapult our country into endless wars abroad and violation of rights at home that persists today.

The Green Party of NYS strongly opposed the bombing of Afghanistan and the rounding up and detention of scores of Muslims who were targeted as a threat only because of their religion or nationality. Over these 14 years, Green Party activists participated in anti-war actions and our candidates campaigned on a platform of peace.

Acts of terror, whether committed by ISIS, the CIA or other organizations intent on wreaking havoc, are never justified but should also never be used as justification for persecution or war. The loss of life that began on September 11th has continued to this day, whether in NYC, a field in Pennsylvania or the towns and villages of Afghanistan and Iraq. These are unbearable and unnecessary losses.

Republican and Democratic administrations, both fueled by corporate money and influence, have perpetuated a U.S. foreign policy that has taken over one million lives in Iraq alone, destroyed cities and pushed people to flee their homelands. Over 6,000 US military personnel were killed in Afghanistan and Iraq, with hundreds of thousands more wounded and an unprecedented suicide rate among veterans. Over 800 billion dollars have been spent on war with billions more on the sprawling military industrial complex. While over these 14 years, the U.S. has seen unemployment, homelessness, poverty and hunger increase.

The Green Party of NYS pays tribute to the many individuals who have played a role in helping others heal from the trauma and loss of September 11th. We believe a government that acts on the four pillars of the Green Party platform; peace/non-violence, ecological wisdom, participatory democracy and social and economic justice will truly heal this country and make a positive impact on the rest of the world.