Rev. Billy Talen and the anarchists 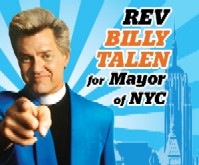 This AP article says that several hundred people have been protesting at the G-20 summit currently underway in Pittsburgh. The reporters, Daniel Lovering and Michael Rubinkam, write that

The hundreds of marchers included small groups of self-described anarchists, some wearing dark clothes and bandanas and carrying black flags. Others wore helmets and safety goggles.

The article goes on to illustrate several other signs that anarchists were involved, such as American flags and “Don’t tread on me” banners.

Near the end of the article Lovering and Rubinkam report that

The march had begun at a city park, where an activist from New York City, dressed in a white suit with a preacher’s collar, started it off with a speech through a bullhorn.

“They are not operating on Earth time. … They are accommodating the devil,” he said. “To love democracy and to love the earth is to be a radical now.”

The activist, Billy Talen, travels the country preaching against consumerism. He initially identified himself as “the Rev. Billy from the Church of Life After Shopping.”

That of course would be our Rev. Billy, candidate for Mayor of New York City