Making sense of the Renewable Revolution

Here in New York State there are a number of proposals for overhauling the energy system to eradicate greenhouse gas emissions. Among these is the call to make New York State 100% renewable by 2030.

A study by Stanford Professor Mark Jacobson[1] outlines what that system might look like in terms of energy sources. A transition of this nature is no small undertaking; no one said climate change would be comfortable! The real question then, is not whether such an endeavor should be considered, but what will it really take to make it happen. Current estimates put the price tag at $460 billion[2].

Superficially, that answers the question, but what does $460 billion really mean? How do we make sense of such a huge number? It's like hearing about "millions of light years" in astronomy documentaries. We know it’s a big number, but we really don’t have a way of contextualizing it. So let’s compare that number, and what’s required to spend it, with things people have already done. How doable is $460 billion?

How Much Do We Spend on Non-renewables?

Perhaps the best place to start is how much we currently spend on fossil fuels and other non-renewables. This way we can see how the alternative stacks up against what we already spend, every day. In 2013 the US spent 7.4% of GDP (the monetary value of everything we produce in our country over the course of one year) on non-renewable energy.[3] According to EIA.gov estimates, New York State alone spent nearly $66 billion on energy in 2013[4].

Loosely speaking, when the typical consumer pays for energy - electric bill, natural gas, fills up their car with gasoline, etc – that bill generally goes toward extraction costs and profit for the firms involved. The portion that goes toward extraction costs is important. It means labor costs, transportation costs, and capital depreciation. Capital depreciation largely means two things. 1. Fixing infrastructure that is being worn out, as most infrastructure has a designed lifespan. 2. It means the construction of new infrastructure, and in the case of fossil fuels it means a lot of it. Each time a well dries up, oil companies have to set up a new well. This means non-renewables are constantly building new infrastructure in a race to maintain supply.

In contrast, $460 billion (our target number to get to 100% clean, renewable energy) divided over 14 years is only 2.27% of New York’s $1.44 trillion GDP, or $32 billion a year. This is less than half of New York’s annual expenditure on non-renewables. This means, from a social cost perspective, we could use the funds that would be used on labor and depreciation of fossil fuel infrastructure to cover all of the costs. In other words, we are already allocating more resources each year into maintaining our current non-renewables than it would take to transition to renewables. If we would be paying the depreciation costs of non-renewables, these same funds could go to installing new renewable sources instead of constructing new fossil fuel infrastructure.

The continual reconstruction of fossil fuel infrastructure is a huge social expenditure. Now, you might point out that the the bulk of fossil fuel infrastructure was built up over time, and we need to make a just transition to renewables comparatively quickly. But we do have examples of heroic, civic infrastructure achievements that were built in totality at great social cost. Just like the imperative to quickly build a renewable energy sector, in the 19th Century a horrible threat to the populace required a massive undertaking: building the sewers. 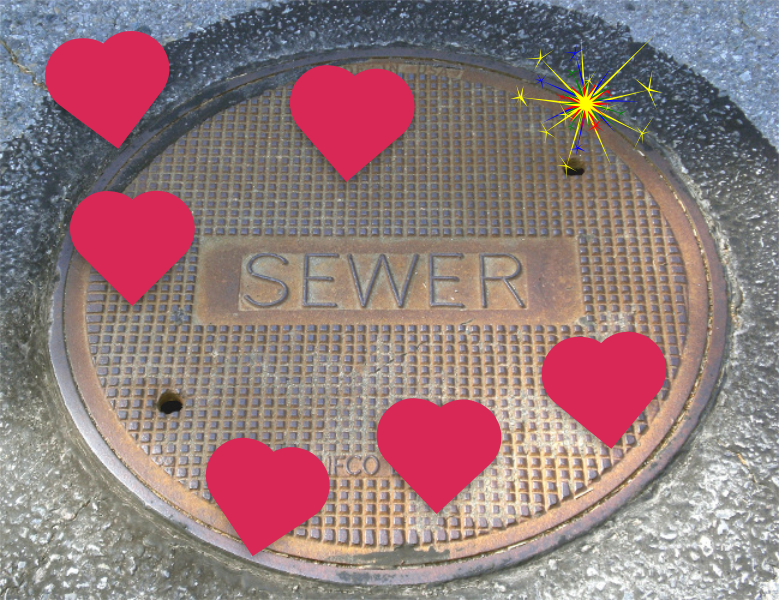 Yes. The sewers! People don’t often think about possibly the most important infrastructure in any modern city. While we take sewers for granted today, they were a huge societal project. Just like climate change, poor sanitation presented mounting social dangers with ever increasing evidence to back the claims. By the mid 1800’s cities were exploding in size. This growth posed a serious health risk. Tens of thousands of people were dying in outbreaks of diseases, like Cholera[5]. Initially the wealthy were able to flee the densely packed cities to distant communities where sanitation was not an issue.[6]

However, as evidence for waterborne ailments mounted, the problem could not be ignored and cities were forced to act. An ex-President and a standing president died of cholera within a year of each other. Though they were large projects and took years to build, cities built sewers wholesale, expanding access and sanitation to everyone. Perhaps most dramatic was the construction of the Chicago sewer. With a typical cost of $5,000 for a four flour building[7] (or over $140,000 dollars in today’s labor costs[8]), the entire city of Chicago was literally raised 4-6 feet and a sewer built below. Thankfully, the transition to a renewable economy won’t require raising every building in New York 6 feet! Instead it will ask that we install solar panels on our houses and wind turbines at sea. Considering what is at stake with climate change, the transition is a no brainer.

The creation of sewer systems dramatically improved public sanitation and cleaned up many of our public waters. In contrast, our search for non-renewables has polluted our air and in some cases made our water poisonous. A startling example is the Alberta Tar Sands.

From 1999 to 2013 approximately $201 billion has been invested into the Alberta Tar Sands project[12]. The scale of the Alberta Tar Sands boggles the mind. It is ecological destruction on a scale hitherto unimaginable. The liquid surface of the tailing ponds alone cover an area of 88 square kilometers, the same size as the island of Manhattan. These tailing ponds are absolutely toxic, resulting in the death of any animals that come in contact[13]. Furthermore, these tailing ponds have begun to permeate into the ground water and contaminate the nearby river[14], putting first nations communities at risk. Combined with the tearing up of the boreal forest and the deep mines, we are left with a landscape against which the Lord of the Ring’s Mordor seems pleasant in comparison[15].

But, just like the radical changes to the Alberta Boreal Forests, humanity is quite capable of making intentional radical changes. We know this because the mobilization for World War Two radically changed the industrial and labor relations landscape of the United States.

The long-term impacts of climate change place us at a turning place in history, likewise World War Two was an exceptional circumstance to which our nation responded with extreme measures. Within a very short time the entire structure of the US economy was fundamentally shifted. From 1940 to 1945 over 35% of the American workforce was shifted to labor dedicated to the war effort. Real product of the US increased by over 50%, and the production of war goods went from 3% of national income to a peak of 54%[16]. Additionally, real wages increased by over 50%[17], and union membership increased over 40%[18]. This is not to suggest that we need a war, but that radical economic transformation in a short period of time is feasible when the people are dedicated to the project. If our grandparents could pull this off without email, cell phones, let alone computers, then in the words of FDR “Let no man say that it cannot be done! It must be done[19]”.

History is filled with examples of people coming together to embark on projects that radically reshaped their economy. Right now, we are desperately constructing fossil fuel infrastructure at a feverish pace. These fossil fuel projects are monstrous in scale, weighty in expenditure and increasingly costly for our society in terms of our health and environment. In contrast, switching entirely to renewable energy is a considerably smaller endeavor. Fight for a just transition!