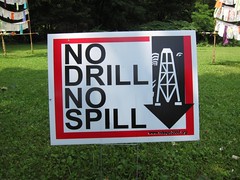 Peter LaVenia, the Green Party's candidate for State Senate in District 44, slammed the news that the Cuomo administration is preparing to allow 50 hydrofracking wells to operate across New York in 2013 and continued calls for a statewide ban to be passed in the State Legislature.

"I challenge Andrew Cuomo to drink fracking fluid instead of clean water for the next year if he truly believes it is safe. A Congressional report released in 2011 found 650 compounds in the fluid were carcinogenic and harmful to human health under the Safe Drinking Water Act. Why does Governor Cuomo want to subject New Yorkers to this when he won't take the risk himself?"

"New York State has a choice: a clean, green, renewable energy future or catastrophic climate change. Why did the Cuomo administration turn its back on an off-shore wind project on the Great Lakes while supporting fracking? Fossil fuels, even natural gas, are dirty energy. We can move to a 100% renewable future in the next twenty years with dedicated leadership. Germany produced 50% of its electricity from solar this year, at a latitude worse than New York's for solar energy, as a result of intelligent government policy - policy that stems from the German Green Party's involvement in government."

"If elected to the State Senate, I would immediately work to implement a statewide ban and help support the resistance to hydrofracking. It's unfortunate that my opponents in this race, State. Sen. Neil Breslin and County Legislator Shawn Morse, haven't called for a statewide ban. The politics of the Democratic and Republican parties seem to be motivated more by potential campaign donations from the petrochemical industry than the health and safety of New Yorkers. As a Green Party candidate, I refuse all corporate and special interest donations, and call for publicly-owned renewable power generation to provide clean, cheap energy to all New Yorkers. Unfortunately Cuomo and the legislature can't say the same," said LaVenia. www.facebook.com/votelavenia