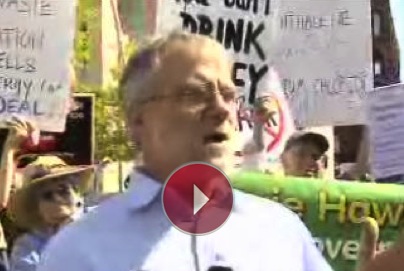 Howie Hawkins, the Green Party candidate for Governor, joined with Dr. Cecile Lawrence, the Green Party nominee for US Senate (against Gillibrand) and Mary Jo Long, Green Party Afton Town Board member, in calling for a permanent ban on hydrofracking for natural gas. The Greens said that a moratorium on fracking was inadequate.

Speaking in favor of a ban outside of the regional EPA hearing in Binghamton, Hawkins said, "we should focus our energy policy and investments on the rapid transition to a safe, clean energy system based on conservation, efficiency and renewables. As the BP oil disaster in the Gulf of Mexico reminds us, 'Drill, Baby, Drill' inevitably means 'Spill, Baby, Spill.' Using hydraulic fracturing of rock formations in gas drilling results in the contamination of water, air and soil. Accidents inevitably happen, which result in major spills that can extend contamination far from the well site."

Hydrofracking means injecting toxic-laden fresh water and sand at extremely high pressure into rock layers to shatter the stone and release the gas. Each frack injects 2 to 9 million gallons of water with 20,000 to 90,000 gallons of toxic chemicals. Hawkins detailed a host of problems with hydrofracking that have occurred in thirty states, including


"With a failure rate between 2 and 8 percent, hydrofracking poses an unacceptable risk to NYS' abundant water supplies, a natural resource that is the state's most important natural resource base for sustainable economic development in the agriculture, manufacturing and tourism sectors," said Hawkins.

“We know enough now to demand a ban,” added Lawrence. “The stronger 18-month moratorium that some environmentalists have pushed the state to adopt until the US Environmental Protection Agency completes its study of hydrofracking will do little more than the weaker 9-month moratorium now pending in the state legislature. The EPA study is more likely to recommend regulations for proceeding with hydrofracking. The New York State DEC’s draft SGEIS openly supports drilling, minimizes the enormous risks and fails to consider the environmental and social costs of drilling. It sets up the conditions to regulate drilling — not to stop it,” Lawrence added. Lawrence has been active in the movement against hydrofracking.

“Andrew Cuomo and the Republican gubernatorial candidates say they support hydrofracking if it can be done safely. The EPA study, like the DEC’s dSGEIS, will likely provide the cover they need to move forward with hydrofracking despite widespread public opposition,” added Hawkins.

Afton Green Town Board member Mary Jo Long said, "You should vote for the Green Party Because the Democrat/Republican Corporate Party in the New York legislature took away our right to say no through our local elected government. Before 1981 local governments -- through the NY Constitution’s Home Rule provision -- had the right to limit, direct, and prohibit gas drilling activities through zoning, and other local powers to protect health and welfare. The Corporate Party amended the law to take that Home Rule right of local control away. They tell us local town government can’t declare school yards, parks, hospitals and nursing homes off limits to gas drilling. They gave exclusive permitting authority to unelected agencies like the DEC and the Public Service Commission. We need an alternative party to work for democratic control over energy policy."

The position of the Greens is that natural gas is not “clean” energy but rather another polluting, non-renewable fossil fuel that releases greenhouse gases into the atmosphere, thus contributing significantly to global warming. Gas is often portrayed as a “bridge fuel” to provide a lower-carbon alternative to coal while zero-carbon technologies like wind, solar, ground source heat pumps and other renewables scale up capacity and reduce in price. But increased use of “cheap” natural gas will merely postpone the growth of — and divert investment from — wind, solar, ground source heating and cooling, and other renewable energy sources. We will find ourselves addicted to a new fossil fuel that further delays the long overdue switch to renewable energy.

The Greens say that extensive drilling will turn the rural landscapes of upstate New York into an industrial belt of drilling rigs, heavy truck traffic, wastewater ponds and pipelines. It will undermine property values, increase the tax burden on local citizens and reduce the tax base of the state. The industrial and transportation activities of the gas and oil industry will place an enormous strain on local public services and emergency services, including roads, water, fire and police departments, emergency medical services, hospitals and health care providers.

Hydrofracking will almost certainly destroy more jobs than it creates. Subsidized in multiple ways by federal and state tax dollars, the gas and oil industry is about 10 times more capital intensive than the US economy as a whole. Few jobs are created compared to comparable investment in other economic sectors. Most of the workers skilled in the industry will be imported from outside the state. Hydrofracking will destroy other jobs in agriculture, tourism, sport fishing and hunting as rural landscapes are transformed into industrial wastelands.
Campaigns_&_elections Environmental_wisdom Howie_hawkins news
Do you like this post?
Tweet