(Howie Hawkins appeared with former Green Party presidential candidate and former Congressmember Cynthia McKinney on Sept. 12 in Brooklyn to discuss the issue of war and imperialism. Part of it will be played on City Watch this Wed. the 15 at 10 AM on WBAI NYC.) 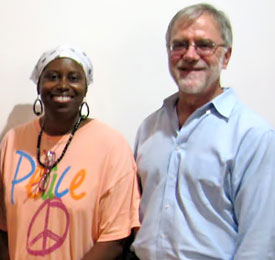 Hawkins Calls for Healing on 9/11/10
Supports an  End to the War on Terrorism
Howie Hawkins, the Green Party candidate for  NYS Governor, said today that he hoped that 9th anniversary of September 11th  could be used as an opportunity to heal the wounds that still pain so many New  Yorkers.
"The emotions that we all confront from 9/11 are complex. We  want justice for the many New Yorkers that were murdered that day. We want our  loved ones to be protected from the threat of such future attacks. But our grief should not become a blind demand for revenge, used to justify hatred or bigotry.  Our collective healing process should embrace the best attributes of our country, making us stronger, providing an example of moral leadership that  other countries should seek to emulate," said Hawkins.

Hawkins said it  was important for religious, civic and political leaders to speak against  seeking to blame the Islamic faith for the actions of a handful of criminal  terrorists. He applauded the many faith leaders who in recent weeks that have  done so in the controversy over the construction of an Interfaith Islamic Center  near Ground Zero.
Hawkins said he opposes the "war of terrorism" as the  wrong response to 9/11, which has failed to make America more secure while it  has wasted trillions of dollars in increased military spending and resulted in  the deaths of, and injuries to, tens of thousands of American soldiers and  several million innocent civilians in the Middle East. Spending on the military,  already excessive, has increased by two-thirds since 2001. America now spends  more on the instruments of war than the rest of the world  combined.
"Muslims, residents of the Middle East, and poor people in  Third World countries are not the enemies of the American people. Treating the  rest of the world's populations as our friends and seeking to build a world that provides a decent standard of living and security for all is the best way to make America secure. We need to bring our troops home from the Middle East and the more than one hundred other countries where they are stationed. We need to  divert our military budget into rebuilding America, funding a WPA-style jobs  program, investing in renewable and clean energy sources to deal with climate  change, putting more money into education, housing, infrastructure, investing in  the American people," said Hawkins.
"Bringing the relatively small number  of terrorists to justice is best pursued by international cooperation on  intelligence and police action. The US wars of occupation in the Middle East and  Southwest Asia are breeding terrorists, not eliminating them," he  added.
Hawkins also said as Governor he would pursue a criminal  investigation to prosecute all of those who were responsible for murdering three  thousand individuals at the World Trade Center. This include individuals who  provided intelligence and financing for the attack.
Campaigns_&_elections Candidate New_yorkers news
Do you like this post?
Tweet