If a Third-Party Candidate Says Something in the Forest . . . From Metroland

"Social and environmental issues have all

but vanished from the public dialogue, while the two major contenders promise corporate tax breaks and banter about each other’s “cojones." 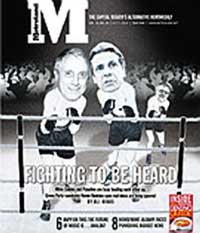 Green Party gubernatorial hopeful Howie Hawkins, along with Libertarian candidate Warren Redlich, say their appeal to voters on election night would be surprising—if only the media would give them any attention

Election Day is less than a month away, and the race for governor has begun to look like one of those late-night Ginsu commercials, with each candidate promising their fiscal plan will cut the deepest. It slices, it dices, it cuts Medicaid, reduces pensions, and if you call right now, we’ll even lower your taxes!

The faltering economy is the principal public concern this election season, so gubernatorial candidates are determined to pitch voters the most appealing plan for recovery. Social and environmental issues have all but vanished from the public dialogue, while the two major contenders promise corporate tax breaks and banter about each other’s “cojones.”

Looking at the campaign platforms of Andrew Cuomo (D) and Carl Paladino (R), it may seem that implementing spending cuts and hiring freezes and withholding grant money are the only options available to close the state’s yawning budget gap. Nearly every candidate running for governor has put forth their version of an “austerity plan,” emphasizing statewide belt-tightening and massive reductions to social services.

Hawkins says he has a “prosperity plan” to reinvigorate the state’s economy. According to Hawkins, this plan would serve to even the playing field between economic classes, resolve the state budget crisis, promote ecological sustainability and create jobs for hundreds of thousands of unemployed New Yorkers. He believes that many of the issues important to progressive voters today—civil rights, ecological sustainability, improved social services and government oversight of big business practices—have long been paid insincere lip service by leaders of the Democratic Party, especially here in New York. With liberal votes in their “back pockets,” contends Hawkins, these politicians have gone on to make decisions based purely on the influence of corporate interests.