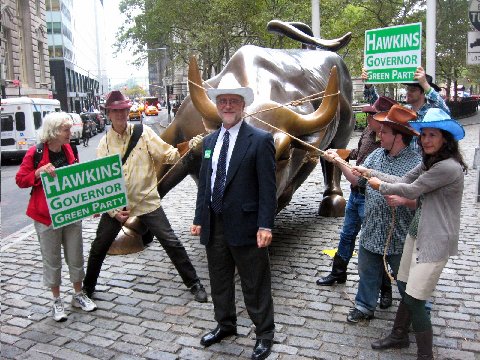 Lassoes the Wall Street Bull to Wrangle Back the Rebates

Howie Hawkins, the Green Party candidate for Governor, challenged Andy Cuomo to come clean today about why he is refusing to talk about the rebate of the state's Stock Transfer Tax.

Few people know that gubernatorial Green Party candidate Howie Hawkins once worked on Wyoming Senator Clifford Hansen's ranch. "Back then I was baling hay. Now we're talking about bailing out the people."

"But the people of New York need to round up these state revenue rustlers on Wall Street!" thundered Hawkins, as he lassoed the Wall Street Bull this morning as part of the Green Party's Rootin' Tootin' Wall Street Rodeo to Wrangle Runaway Stock Transfer Tax Revenue From Corporate Rustlers.

New York State presently collects a very small tax on each stock transfer, but then rebates the tax, now in excess of $16 billion annually, back to Wall Street speculators. The tax is hardly noticeable for anyone who invests in Wall Street, primarily hitting those who treat the Stock Market as a casino, making hundreds of trades daily.

"Why is Mr. Cuomo, the anointed front runner, hiding the Stock Transfer Tax from the public when it is an obvious way to bridge the state budget deficit? Why does he rule out higher taxes on the rich when they have more money than ever? Why he won't make them pay their fair share? They'll still be rich after paying their fair share. All the politicians in Albany act like we're out of money and debate over what services to cut, all the while refusing to tell New Yorkers about the $16 billion they hand back to Wall Street speculators," said Hawkins, a member of the Teamsters Union who unload trucks for UPS in Syracuse.

"The Stock Transfer Tax doesn't impact upon people making serious long term investments. It makes those who manipulate stocks for short term bets pay a price for doing so. Democrats had no problems bailing out bankers and Wall Street financiers for all the damage they did with their speculative games to our economy, but they don't want to bail out average New Yorkers or those who saw their retirement funds collapse due to Wall Street's misdeeds," said Hawkins.

"One of the goals of progressive taxes is to ensure a more fair distribution of wealth, which is also important to increase spending power for average residents and stimulate the economy. New York has the greatest income inequality in the US, while the US has the greatest inequality among the industrial democracies. Cuomo wants to lock this in, supporting a state tax system where the janitor in Trump Towers pays a greater share of his income in state and local taxes than Trump does," noted Hawkins.

"The greed of Wall Street speculators is behind the recent economic crisis, including the housing crisis and the massive decline in retirement funds. Yet those who have caused the current economic crisis were the ones that benefited from the trillions in bailouts from Congress. The ongoing Wall Street bailout is the greatest transfer of wealth in world history. As Governor, unlike Andy Cuomo, I will stand up to Wall Street and make them bail out Main Street and pay their fair share of taxes," noted Hawkins.

Since the administration of Governor Mario Cuomo, NY has awarded huge tax cuts to the rich that now cost the state $16 billion annually in revenue. If NY went back to our income tax system of the 1970s, with adjustments for inflation, 95% of us would get a tax cut - yet the state would collect $8 billion more in taxes.

With Wall Street handing out over $20 billion in 2009 cash bonuses, a 50% Bankers' Bonus Tax on cash bonuses over $50,000 would generate another $10 billion for the state treasury.

"The rich are hoarding their money. They are sitting on $10 trillion in cash and liquid assets in their personal accounts, plus $1.8 trillion cash in corporate coffers. The rich speculating for short term gains from existing productive assets instead of investing long term in new productive assets to get the economy going again. We need to tax them and put some of that money to better use through public spending and investing in the new productive assets we need for a new jobs in a sustainable green economic recovery," added Hawkins.

In a “A New Deal for New York,” Mike Wallace outlines the history of NY's Stock Transfer Tax. A stock transfer tax was levied by the federal government to help pay for the Civil War, the Spanish-American War and World War I. New York adopted one of its own in 1905, despite threats from the New York Stock Exchange that if passed it would instantly depart to New Jersey. The tax is up to 5 cents per share, up to a maximum of $350 per transaction. In 1965, when New York State introduced a sales tax, it limited the amount of local sales taxes to 2 percent. Because New York City’s sales tax was already 3 percent, it got to keep the stock transfer tax as a consolation prize.

In 1979, the state began the current rebate program, but continued to collect the tax since it was legally obligated to ensure that the bonds that had refinanced NYC would be repaid. The state did give New York City a “stock transfer tax incentive aid” of about $100 million annually. The state eliminated the aid entirely in 2001. In 1999, when several European exchanges joined forces and abolished transfer taxes in an effort to capture business from NYSE and the London Stock Exchange, some of the latter’s members insisted that England immediately eliminate its hefty tax, lest the fiscal roof fall in. The British government refused, being made of sterner stuff than the one in Albany. The London Exchange, Wallace concludes, “continues to flourish mightily.”

A 2003 poll commissioned by the AFL-CIO showed that by 63% to 24%, New Yorkers favored re-instituting a stock transfer tax of one or two cents per share on stocks traded on the New York Stock Exchange.