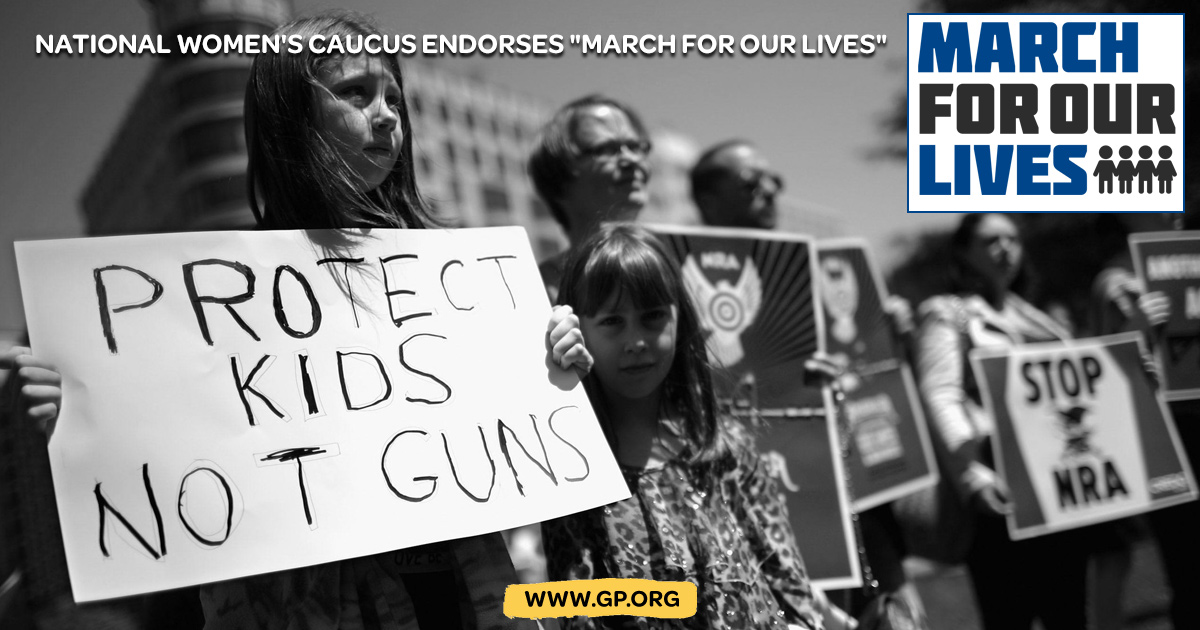 WASHINGTON, D.C. -- The National Women's Caucus of the Green Party of the United States has endorsed the March 24 "March for Our Lives" and other student walk-outs in protest of gun violence in their schools in the wake of the horrific mass murders at Marjory Stoneman Douglas High School in Parkland, Florida, on February 14, 2018, in which 17 people were killed and 14 were wounded. Slayings at schools where parents trust that their children will be safe and protected appear to be on the rise. The Chicago Tribune has written that between 2000 and 2010, of the recorded 57 shooting incidents in 36 countries, 28 of them occurred in the United States.

Women's Caucus: "It is long past the time to listen to our children."

The Women's Caucus condemned the influence of the National Rifle Association, which has opposed measures to fund research to account for America's gun epidemic, on the White House and Congress and strongly rejected President Trump's proposal to arm teachers.

Inspired by the students' commitment to nonviolence and willingness to risk punishment, Women's Caucus co-chair Joy Davis noted that in some states children have been threatened with punishment if they decide to join the walkout.

"We can no longer continue to ignore this very critical issue. We will be standing in solidarity with the students. Greens across the country are monitoring efforts to punish children who participate in these walkouts and will take action by raising awareness and resisting efforts to suppress our children's voices," said Ms. Davis.

The Green Party's national platform calls for the elimination of loopholes that permit sale of weapons without background checks and for efforts to prevent violent crime.

Caucus member Genevieve Marcus drew a connection between incidents such as the recent shooting in Florida and the tolerance of violence in our society.

"With all the recent school shootings in the country, with all the killing of suspects and abuse of prisoners and most women, with a foreign policy of constantly expanding, endless wars, with children being sold as slaves, even with animals being cruelly tortured and killed, isn't it time for the people of the United States to start think seriously about nonviolence? How much more degraded can we get?" said Ms. Marcus.