Greens Say it is time to Criminalize Fracking, Invest in Clean Energy and Divest from Fossil Fuels

(Albany, NY) Three years ago the Green Party of NY was virtually alone in calling for a statewide ban on the hydrofracking of natural gas, with most environmentalists instead calling for a moratorium or better regulation of the industry. Therefore, the Greens were thrilled to see thousands of New Yorkers coming to Albany on Monday to support a ban on fracking and for action on moving to clean, renewable energy.

In addition to its long time call for a statewide ban, Green Party activists and elected officials have led local fights to not only ban hydrofracking of natural gas in their local communities as a home rule measure but to criminalize such activities. 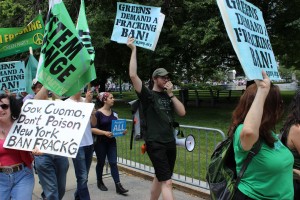 Fracking, long supported by NYS DEC, the Governor's office and the Obama administration, has been part of the push by the Democrats to promote extreme fossil fuel extraction methods (e.g., mountain top removal of coal, fracked oil and gas, deep water and Arctic drilling, tar sands oil) in a "drive for energy independence" even as climate change has devastated NYC, Long Island, and the planet. The Green Party said that the real focus had to be to ensure that 80% of our proven fossil fuel reserves are never converted into greenhouse gases, the carbon budget that climate scientists have concluded we must adhere to in order to avert runaway global warming.

"The Green Party of NY since 2010 has called for a complete and total ban on this toxic dangerous process called fracking. Fracking should legally be stamped as a felony. Banning the growing of hemp and the growing and sale of marijuana is insane when all the science shows that neither of those is nowhere as dangerous as fracking clearly is," noted Cecile Lawrence, the Green Party candidate for U.S. Senate 2010 and for Tioga county legislature 2011.

The proposed fracking criminalization law declares that fracking is destructive to public health, environment, community, economic stability, jobs and the fundamental integrity of the body politic.

During his 2010 Gubernatorial campaign, Green Party gubernatorial candidate Howie Hawkins was often barred by major environmental organizations from speaking at anti-fracking events because of his support of a ban on fracking. The big money groups instead provide smokescreen coverage to the Democrat party politicians by promoting a moratorium and regulation of fracking.

Yet Hawkins was often called up to speak at such events by grassroots activists. Hawkins told them "as the BP oil disaster in the Gulf of Mexico reminds us, “Drill, Baby, Drill” inevitably means “Spill, Baby, Spill.” Using hydraulic fracturing results in the contamination of water, air and soil. Fracking New York will to create a short-term gas boom that soon leaves behind a long-term economic and environmental bust. To protect the planet from the devastating impact of climate change, as Governor I will instead invest for the long term in a sustainable energy system based on the efficient use of renewable energy generation and storage systems."

"It is encouraging that more environmental groups understand that we need to invest now in renewable energy - not waste resources on using natural gas, a fossil fuel, as a replacement to coal or oil," noted Ursula Rozum, the recent Green Party congressional candidate from Syracuse.

"We are at a fork in the road. Fracking will lock us into climate catastrophe. Either we put all new energy investments into clean wind, water, and solar energy, or we burn fracked gas and emit enough carbon and methane to blow us past the 2 degree Celsius rise in temperatures that climate science tells us is the tipping point for runaway global warming," said Gloria Mattera, cochair of the state Green Party.

A centerpiece of recent Green Party elections for Governor and President (Jill Stein) has been a Green New Deal. Building upon steps taken by FDR during the Great Depression, the Green Party would put 25 million plus Americans back to work through a massive investment in clean renewable energy. The Green commitment to provide a job to everyone that needs it would also include support for public service jobs (e.g., pre-K, youth and senior programs, community health clinics, etc.).

A recent report co-authored by Stanford University professor Mark Jacobson, "Examining the Feasibility of Converting New York State's All-Purpose Energy Infrastructure to One Using Wind, Water and Sunlight" documents how an electrical-power platform consisting exclusively of wind, water and solar ("water" including geothermal, tidal, wave and hydroelectric) would not only provide 100% of NY electric power in 17 years but would also reduce its electrical power demand by 37 percent.

The Green Shadow Cabinet, an outgrowth of the Jill Stein Green Party Presidential campaign, has proposed the huge profits of the fossil fuel industry be used to develop and expand renewable energy production and distribution. In addition, a publicly owned fossil fuel industry will ensure that fossil fuel extraction is minimized and phased out as earnings are reinvested in renewables instead of fossil fuels.

The Green Party also called upon State Comptroller Tom DiNapoli to divest New York's pension funds from fossil fuel companies, as a growing number of faith groups, universities and communities across the country are doing.

"Fossil fuel companies are responsible for burning up the planet and making it more difficult for humans to survive. Studies estimate that already more than 400,000 people worldwide die annually from climate change and that number will get much larger. What fossil fuel companies are doing are immoral. Rather than investing in fossil fuel companies, the state of New York should be suing them to recover the damages they caused with Hurricane Sandy and other severe weather," said Mark Dunlea, a member of the Green Party's legislative committee .
Green_party_of_nys Latest news
Do you like this post?
Tweet