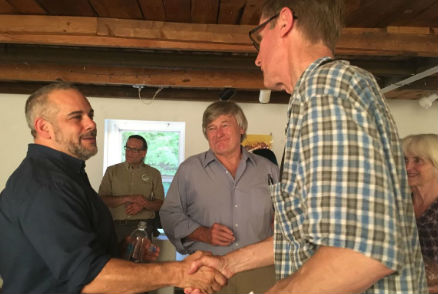 In front of more than 20 people, he preached that he is the only transparent, progressive candidate in a three-person race.

“This is political theater: ‘Don’t step out too far,’” Funiciello said of his Democratic and Republican opposition. “This isn’t political theater for me. I have 36 workers; we do not get paid what we should be paid to make our bread. I sound like a union worker, but I’m the owner.”

In recent weeks, the race included a back-and-forth between Funiciello and Derrick regarding the Democratic candidate’s history as a registered Republican and independent.

At BluSeed Wednesday, Funiciello said he thinks more people will vote for him than the 11 percent who did in 2014, in part because he doesn’t see Derrick as a true Democrat or progressive candidate.

“The Democratic Party is not putting up an opposition to her (Stefanik),” Funiciello said. “They are helping her to get re-elected. That’s not a conspiracy theory; it’s the truth.

“They ran Aaron Woolf in 2014, a tourist from New York City who was a nice guy and I liked quite a bit, but he was a terrible candidate.

“In a Bernie (Sanders) year, in a year when every independent, every progressive, everybody who understands what independence from those two parties means — every single county in this congressional district went for Bernie or Trump. Nobody was interested in the establishment candidates. The whole point is, who should you be running? You should be running a woman, from the district, who is a progressive that people actually know. Instead they pick a guy who’s been gone for 35 years, who was born and raised here, and who is also a very nice guy. I like Mike. I’ll wear a little badge, ‘I like Mike.’ But just like with Aaron Woolf, I have no idea why this guy is running for office at all.”

Funiciello and Derrick have traded barbs in recent weeks. It started with a report in the Elizabethtown-based Sun Community News in which Funiciello criticized Derrick for changing his voter registration from Republican to Democratic last March, just in time to run for Congress. In a recent interview, Derrick said as a young man in the military, he identified with Ronald Reagan and the Republican Party. He added that, as a candidate, he appeals to Republicans and Democrats.

“We have problems which are no longer partisan; they are existential,” Derrick said at the Enterprise office Thursday afternoon. “And I am the kind of guy who can approach it in that light.”

Funiciello disagrees, seeing himself as the only candidate in the race representing the working class, with the longest track record of principled policy beliefs of the three candidates.

“I am not a spoiler,” he said. “I represent the working class. We outnumber you 10 to 1, ruling-class people running for office. Do not dare say that. We want our democracy back. I’m the vehicle by which we can begin the process.”

Funiciello said Derrick stopped into his Glens Falls store in the spring, and the meeting was cordial. But he said he told Derrick he wouldn’t bring up his Republican history if Derrick didn’t call him a spoiler.

“The spoiler argument to me is absolutely ridiculous,” Funiciello said. “It’s very childish. And it’s not because I don’t understand that if you are worried about the presidential race and you live in a swing state and you really want to vote for a lesser evil — knock yourself out. But this is Congress. And if you’re worried about control of Congress, elect a Green, ‘cause I’m gonna actually be voting for and saying the things you would like to have said in Congress.

“If Mike does that, it’s going to be a happy accident of his corporate sponsorship that there is a coalescence of (his) view and theirs. And it’s not going to be very frequently.”

When someone in attendance asked if he is in favor of having no political parties, Funiciello said he is. He described the two-party system as unrelatable and touted his Green Party candidacy as the answer.

“It’s too Orwellian. It’s too Monty Python. How can we relate?” he asked the audience. “The thing is, we can. We can relate to it in this race, right now in 2016, because you can elect a person who actually gets up every day, works for a living and actually grew up here, who stayed here, who knows what it’s like to live the life that all of you’ve lived.

“Republicans and Democrats look at each other as a cartoon, and I don’t,” he added. “I am in the district in the cafe, meeting all of these people, being friends with them, coaching their children in hockey, baseball and lacrosse, and understanding full well that they are human beings, too. ‘Oh, there’s a Republican who plays the guitar. He wrote his own song. Maybe he does have a soul after all.’ We have to kill this thought process that every voter in this country can be divided between Republican or Democrat, and that they are all going to fit that label, and that’s it. It’s not true.

The only challenger to longtime Republican state Sen. Betty Little was also in attendance Wednesday — Steve Ruzbacki, a first-time candidate who came to the area to work as a processing engineer for Barton Mines and joined the Green Party in 2002.

Ruzbacki spoke before Funiciello and said he’s been touring the district and plans to meet with the Saranac Lake progressive group, Voters for Change, on Aug. 5 at Saranac Lake’s Left Bank Cafe. Asked why voters should consider him versus Little, Ruzbacki echoed much of what Funiciello said.

“Sure, she’s bringing grant money to your community. A lot of that money is doing really wonderful stuff for the community. Listen, I want to support libraries; the land trust sounds like a good idea to me. But I’m certainly not against everything Betty Little does.

“But what I am against is taking corporate money and then representing those interests. To me, that’s not representing the people. You can’t represent two masters like that. And I think I would appeal a lot to Republicans, too, because of my stance against corporate welfare. And frankly, the SAFE Act is completely unconstitutional. I’d like to see that repealed.”