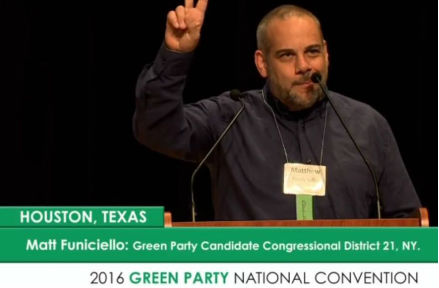 As he took the podium at the Green Party National Convention in Houston on Saturday, Matt Funiciello said he had “an angry Green speech” to give.

In just about seven minutes, Funiciello — the Green Party candidate for New York’s 21st Congressional District, running against Democrat Mike Derrick of Peru, in Clinton County, and U.S. Rep. Elise Stefanik, R-Willsboro — railed against a litany of polices of the last three presidential administrations, both major political parties and their presidential candidates this year, and the electoral system itself.

“It seems to me our two corporate war parties are destroying our world, aren’t they?” he asked, saying later, “They’re doing a terrible job, and it’s because of corporate money.”

He called the widely-held belief that Ralph Nader, the Green candidate in the 2000 presidential race, spoiled the election for the Democrats a “mythology.”

He began it with a birthday wish to his son, John, who turned 22 years old on Saturday.

“We’re all here today specifically because of a collective desire to start making better decisions, which are truly based on the needs of the next seven generations,” he said, addressing both his son and the audience.

As well, he advocated for the implementation of instant-runoff voting, redistricting and campaign finance reform.

And he ended with a simple call to action: “Be brave, vote Green.”

David Doonan, a convention delegate from Greenwich, was there in Houston and had high praise for his compatriot’s address.

“He spoke very forcefully and very eloquently,” he said. “He had a great, great reception from the audience (of several hundred people).”

In an interview a few hours after his speech, Funiciello said being invited to speak at the convention and then actually doing it had been a humbling experience. He felt recharged by being around like-minded activists and inspired by praise from them on the work he has done in New York.

He devoted particular attention to a Texas woman who had approached him after his speech, nearly in tears, and told him how much it had affected her.

“Now she gets it,” he said, referring to his belief that the major parties can’t be reformed.

The congressional hopeful said he thinks he’ll garner more than 20 percent of the vote come November — he won 11 percent in 2014 — but was concerned that his opponents might not agree to debate in the fall, leaving him with little opportunity to get his message out.