Akeem Browder for Mayor of NYC 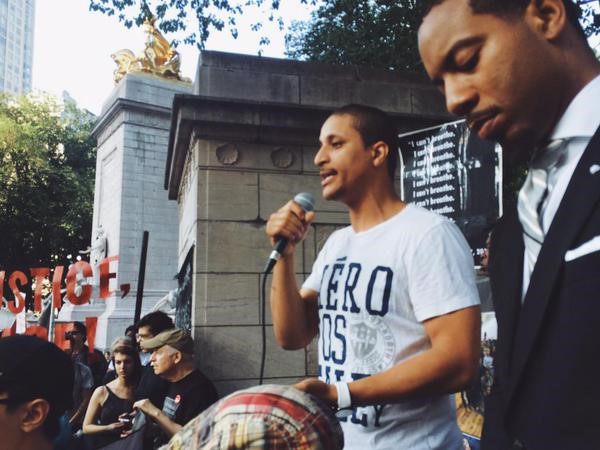 Akeem Browder is the older brother of Kalief Browder who at age 16 was arrested for allegedly stealing a backpack. Unable to afford the three thousand dollars bail, Kalief spent over 1,000 days on Rikers Island awaiting trial where he endured beatings by prison guards and long stays in solitary confinement where he attempted suicide multiple times. Eventually, the charges against Kalief were dropped but the trauma he suffered was too much for him and after trying hard to return to a normal life outside of prison he ultimately took his own life.

Akeem Browder, a Civil Engineer by trade, is President and Founder of The Kalief Browder Foundation and Founder of the Campaign to Shut Down Rikers Island. In these capacities, he has been a champion of "Kalief’s Law" pushing for faster trials. He has also successfully lobbied to ‘Raise The Age’ of criminal responsibility in New York State to eighteen. He is working to decrease criminalization and improve mental health and social services for inmates upon their re-entry following incarceration.

"Bill de Blasio has come up with a weak plan that will take ten years to close Rikers Island, but we need to shut it down now," said Browder who has actively led the campaign and spoke with the Bronx Chronicle about the three year plan to shut down Rikers. The Green Party of New York platform calls for the immediate shut down of Rikers Island.

"Cuomo raised the age of criminal responsibility to eighteen but it won't go into effect for two more years, and under the new law juveniles could still be tried in adult criminal court if they are involved in violent felonies. And even some non-violent felonies could be prosecuted in criminal court if there are extraordinary circumstances,” continued Browder. The Green Party of New York calls for raising the age of adult criminal responsibility for all misdemeanors and felonies to 21 without exception effective immediately. NY is one of only two states in the country which criminalizes our youth at the age of 16. Children of 16 years are adjudicated in adult, criminal courts, rather than family court, held in county jails, and serve their time in the adult prisons.

Akeem Browder's own experience with the criminal justice system is inextricably linked to his brother's tragic tale in a way that many may not have heard about. Spike TV’s documentary "Time: The Kalief Browder Story" provides details of Akeem's mistaken arrest as "The Bronx Rapist" in 1998. At age 15, Akeem was arrested by police who were searching communities of color for a 27 year old male said to have abducted fifteen individual young girls. Akeem explains that he and a 12 year old girl he rode the bus to school with cut school and she performed oral sex on him outside the school. The state waited to try Akeem until he was 16 so they could try him as an adult. Eventually, Akeem accepted a plea bargain to sodomy (oral copulation) in the first degree, a class B felony. All other charges were dismissed. He spent 3 months on Rikers and 5 months in state prison and so must spend the rest of his life with a record as a convicted felon. He must also now register every year for the rest of his life as a sex offender which would not have been required had he been tried as a juvenile. Very significantly, Kalief Browder refused to accept a plea bargain because he saw what happened to his older brother.

Of this incident, Akeem Browder says "I am not making excuses for the public inappropriate actions that got me into that situation, but the fact that the system held me until I was old enough to be tried as an adult and forced me to accept a plea or else face 25 years in jail represents everything that I stand against in seeking to reform our criminal justice system, given the effect it had on my brother.”

“Rikers has been allowed to exist, and destroy lives--especially black and brown lives--for far too long. My brother, Kalief, and I are among the many people who have unnecessarily lost their lives or who live with the lifelong impact of the penal system in New York. To try to convince the people of New York that our jails and prisons are NOT the result of racial injustice, and that lack of investment and resources in communities of color is due to a lack of funds, while children's lives are at stake, is not justice!” said Browder.

Green Party spokesperson Gloria Mattera commented: "The narrative around the Browder family is one of lives having been shattered by our racially-biased criminal justice system, one that Akeem is now doing everything he can to reform in his brother's memory. The causes that Akeem is fighting for are ones that are shared by the Green Party and we are proud to stand with him in this campaign."

In addition to criminal justice reform, key issues that Browder will be focusing on include addressing homelessness, increasing after school programs and ending the school to prison pipeline, and ensuring accountability that fiscal spending is directed to those most in need. Other issues he will advocate for include providing jobs; healthcare and education as human rights; securing a livable climate; bringing an end to “endless” inhumane wars; bailing out students in debt; restoring civil liberties; ending immigrant deportations; and providing a humane path to citizenship.