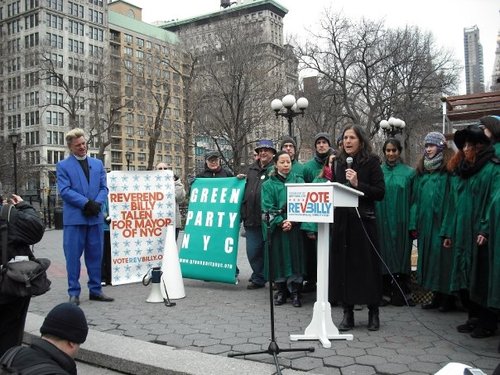 Speaking outdoors in spite of the threatening winter storm, the Green Party candidate known for his work with the Church of Life After Shopping called for an "affordable and livable" New York that relies on on its neighbourhoods and independent businesses for sustainable and equitable prosperity.

"Mayor Bloomberg believes our city is a corporation and our 'five hundred neighbourhoods' just aren’t profitable enough," preached Talen, to responses of "Neighbourhood-a-lujah!" from the crowd. "He gives the legal and political edge to real estate speculators. Bloomy is a mayor of the rich, for the rich and by the rich."

Campaign Spokesperson Gloria Mattera, who ran as the Green Party candidate for Brooklyn Borough President in 2005, opened the press conference by outlining why New York City needs a candidate with Talen's record of activism, and how that record expresses the Green values of grassroots democracy, nonviolence, social and economic justice, and ecological wisdom.