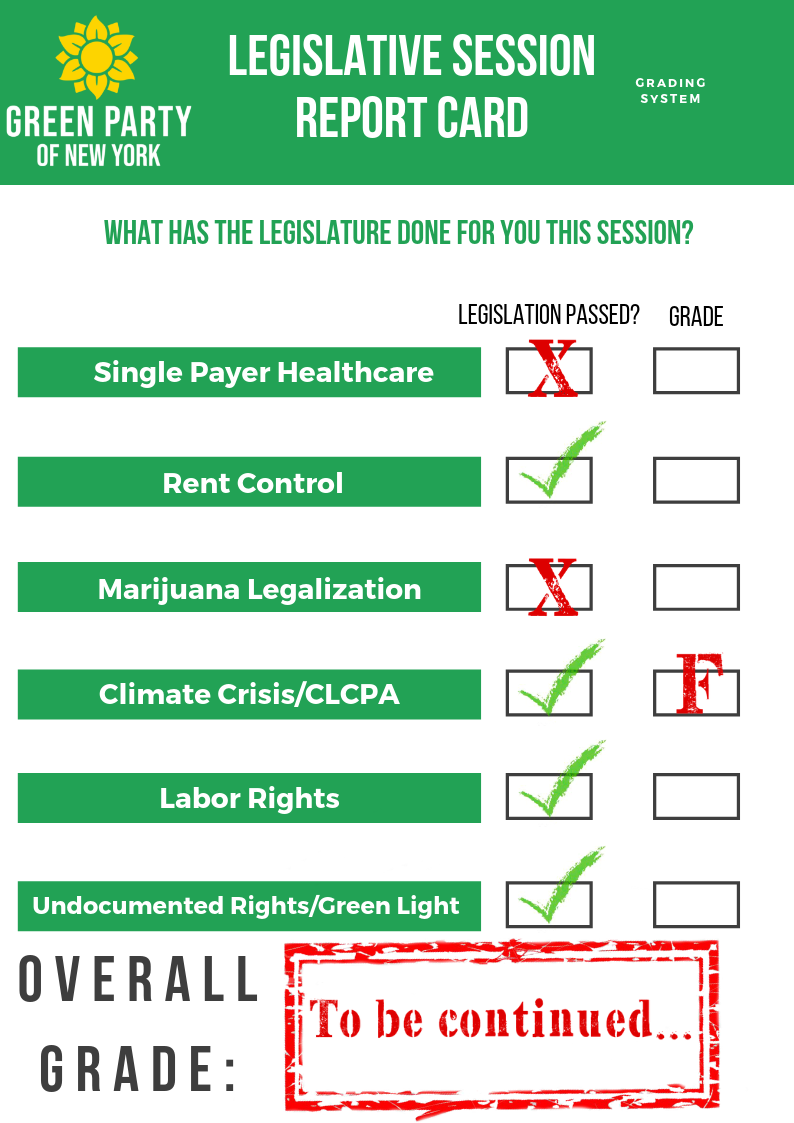 As such, press coverage of the newly minted legislation has been overwhelming positive. “New York just passed the most ambitious climate target in the country,” wrote Vox. “New York State Reaches Landmark Deal On Green New Deal-Style Climate Bill” read The Huffington Post. Even the crusading Sunrise Movement praised the bill, writing: “Bravo to New York’s state legislature for approving their version of the #GreenNewDeal,” in a tweet this past Thursday. Yet, the stark biological truth remains amidst this compromise-obsessed pundit backclapping: setting 2050 as the target for zero emissions is twenty years too late to avoid climate catastrophe and will endanger the homes and lives of many New Yorkers and, if replicated nationally/globally, millions of people the world over.

The CLCPA claims its reports utilize the “best available science and methods of analysis,” basing its emission reduction goals on the October 2018 International Panel on Climate Change (IPCC) study which found that global carbon emissions would need to be drastically cut by 2030, and reach net-zero by 2050 in order to limit temperature rise to 1.5 degrees Celsius. However, not only does this IPCC report base its emissions timeline upon the assumption that engineered technologies such as direct air capture and biomass energy with carbon capture and sequestration will be utilized (technologies which, besides being in early stages of development, may have negative environmental consequences of their own), but IPCC reports tend to be overly conservative in their climate estimations and predictions. Over the years, “IPCC reports have underplayed high-end possibilities and failed to assess risks in a balanced manner” writes Han Joachim Schellnhuber, a professor of theoretical physics, founding director of the Potsdam Institute for Climate Impact Research and senior climate advisor to the EU. “The failure to fully account for potential future changes to permafrost (frozen carbon stores on land and under the seabed) and other carbon cycle feedbacks is just one example.” For instance, in 2007 the IPCC reported:

“Contraction of the Greenland Ice Sheet is projected to continue to contribute to sea-level rise after 2100. Current models suggest virtually complete elimination of the Greenland Ice Sheet and a resulting contribution to sea-level rise of about seven metres if global average warming were sustained for millennia in excess of 1.9 to 4.6°C relative to preindustrial values.”

However, this flew in the face of two independent 2006 studies reporting the Greenland ice cap was/is “melting three times faster than indicated by previous measurements,” and “we are close to being committed to a collapse of the Greenland Ice Sheet.” More specific to the CLCPA, Michael Mann, a leading climate scientist at Penn State, wrote that the 2018 IPCC report “understates warming that has already taken place and overestimates [the] remaining carbon budget” for avoiding 1.5 degrees Celsius. Mario Molina, who was awarded the Nobel Prize in chemistry for his work on ozone depletion in 1995, explained that the report “understates a key risk: that self-reinforcing feedback loops could push the climate system into chaos before we have time to tame our energy system.” This is because the IPCC represents an establishment consensus on scientific views—including those of fossil-fuel producing nations—rather than the cutting-edge of research. And so the IPCC is constantly playing a game of existential catch-up with the ever-increasingly horrific climate realities we are witnessing every day. They simply do not include the most distressing, recent science on climate catastrophe.

However, even if we are to take the IPCC’s emissions guidelines at face value, more recent reporting from the UK’s Committee on Climate Change has found that if achieving net-zero emissions by 2050 were to be replicated worldwide there would only leave a 50-50 chance of limiting temperature rise to 1.5 degrees Celsius by 2100. And this remains the fundamental problem with the CLCPA: The Democrats, holding majorities in both houses of the New York state legislature in addition to the governor’s mansion, are willing to leave the future of organized human existence up to the odds of, at best, a coin toss. Their position, when in power, is to take the conservative approach to what the Breakthrough National Centre for Climate Restoration in Melbourne has called “a near to mid-term existential threat to human civilization”, including a plausible scenario describing social collapse by 2050. And the Democrats are applauded for this gamble. They are “trailblazers;” “progressive champions.” We must demand more from our elected leaders. We must demand that New York state transition to 100% renewable energy/zero carbon emissions by 2030, and pass Assembly Bill A3565, the OFF Act, ensuring we do just that – establishing a goal commensurate to the scale of the existential crisis we face. And this goal can be met. The science is there, we simply must have the political courage to actually fight for a better than 50-50 shot of a habitable Earth.

But let’s make one thing clear: There is nothing politically “mature” about holding both houses of the legislature, starting out from a compromised position, achieving half of that, and calling it a landmark victory in the face of a crisis that threatens the future of the human species. Because not only does the CLCPA completely miss the boat on its emissions timeline, but it doesn’t even look that much like a Green New Deal. Importantly, the bill does not include the right for citizens to sue for its enforcement (which has been crucial to California’s fight against climate change), does not outright ban the creation of new fossil fuel infrastructure, and has had its labor provisions significantly watered down by Governor Cuomo, including gutting the section regarding stipulations intended to provide a safety net for displaced fossil fuel workers and fair wages for those involved in building new green infrastructure. The bill’s language pertaining to disadvantaged communities’ benefits has also been attenuated, changing from promising these communities 40% of the benefits resultant from clean energy spending/investment, to promising “to the extent practicable” that they shall receive “no less than 35%” of the “overall” benefits.

We should not forget that a Green New Deal is not just about environmental justice, but about economic and racial justice as well. These issues are inextricably intertwined – when one falls by the wayside, the others eventually follow suit. The Democrats’ CLCPA fails to seriously address any of them. Conversely, the OFF Act tackles all three with the fervor with which the crisis calls for, ensuring: net-zero by 2030, a “just transition” providing training and comparable jobs and wages to those currently working in the fossil fuel and nuclear industries, and a climate justice task force focused on assisting low-income and communities of color.

Some may say the incremental steps of the CLCPA “are better than nothing,” and while they would be technically correct, it is important to remind ourselves this is the argument has been made to justify status quo half-measures before every serious progression in human freedom and justice. As sociobiologist and philosopher Peter Kropotkin reminded us:

We cannot allow the Democrats’ “practical good sense” to leave our futures up to the odds of a coin toss – the same monstrous plot device utilized by a psychopathic murderer in Cormac McCarthy’s No Country For Old Men. It is not only irresponsible, but exceedingly immoral. Climate change is not going to “grade us on a curve”. While some may say “half a loaf of bread is better than none”, the human species must reply “half a parachute doesn’t stop free fall”. Democrats must decide to take the side of the people – the oppressed – and pass the OFF Act or we must vote them out of office. Political courage must defeat establishment “feasibility,” or we will have defeated ourselves.