McKinney, now in Egypt on the Viva Palestina convoy, will

WASHINGTON, DC -- The Green Party's 2009 Annual National Meeting in Durham, North Carolina, will feature a visit from former US Representative and 2008 Green presidential candidate Cynthia McKinney and a forum on health care reform among several events to which reporters, bloggers, and photographers are invited.

The meeting will take place Thursday, July 23, through Sunday, July 26, on the campus of North Carolina Central University (NCCU) in Durham. More details about media events at the meeting will be announced and posted online in the coming week.

NCCU, the nation's first public liberal arts institution founded for African-Americans, is celebrating its 100 year anniversary. For information about Durham, visit the city's online Visitors' Guide and Information Center. Reporters are encouraged to visit the media credentialing page for the meeting.

An opening press conference on Thursday, July 23, at 4 pm will welcome members of the media and introduce the meeting. Two press conferences on Friday morning will feature Green candidates, officeholders, and party activists, with a special emphasis on Greens in North Carolina and the party's Black Caucus leaders.

On Friday afternoon, 3:30-4:30 pm, the Green Party will present a public forum on health care reform and the need for a Single-Payer national health care program. Reporters will have the opportunity to meet and interview the forum speakers. 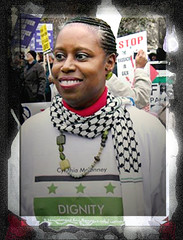 
On Saturday afternoon at 3:00 pm, Cynthia McKinney will speak in the Miller-Morgan Building's main auditorium at NCCU about her recent efforts, with the Free Gaza Movement and Viva Palestina, to bring medical and other supplies to Gaza in the wake of Israel's brutal invasion. Ms. McKinney and other Free Gaza human rights activists were aboard the Spirit of Humanity when it was seized by Israeli gunboats. The 'Free Gaza 21,' including Ms. McKinney, were held in a prison in Ramla, Israel, until their release last week.

Ms. McKinney is currently in Egypt on a Viva Palestina convoy to Gaza, which has been held up by the government of Egypt. According to Viva Palestina's July 12 update, "The Viva Palestina members who spent the night in their buses at the Suez Crossing after being stopped by Egyptian authorities on July 11 have now rendezvoused in Cairo with British Member of Parliament George Galloway and former Congresswoman Cynthia McKinney, who has rushed to join the convoy following her deportation from Israel on Wednesday."