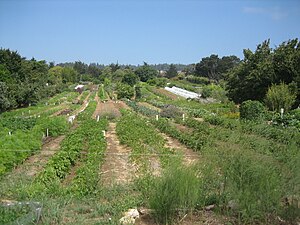 
Hawkins supports a shift towards organic  farming, ending the use of toxic pesticides, herbicides and fertilizers, and  strengthening NYS Food Policy Council

Howie Hawkins, the Green Party candidate for Governor, said  today that he would promote organic farming and a reduction in the use  pesticides and carbon-based fertilizers during his tenure. Hawkins said that the  state must also show more leadership in helping farmers transition to meet the  demands presented by climate change and peak oil.

Hawkins said he  would appoint a Commissioner of Agriculture and Markets with a strong track  record in organic farming, community food security, farmland preservation,  Community Supported Agriculture, and support for family farms.

“The  good thing is that every politician promises to help small and medium-sized  farmers, so the issue has popular support. Unfortunately, we have been hearing  such promises for decades, literally since the founding of our country, yet more  and more small and medium-sized farmers are being forced off their land. State  officials keep on identifying problems like processing, distribution, and  protecting farmlands from development pressure, but decades go by without the  needed investments and leadership,” added Hawkins.

Hawkins said  that the state must do more to help small and medium size farmers with issues  such as small-case food processing, local marketing and distribution (including  regional wholesale farmers markers), and transportation.

Hawkins supports legislation to establish NYS Food Policy Council  by law rather than Executive Order, including the creation of a strong advisory Board to ensure broad participation by a wide range of groups, including community food security advocates who are largely missing from the present Food Policy Council. Hawkins also supports the establishment of regional and city  Food Policy Councils across the state, along with a greater recognition of food  systems as an integral part of economic development.

Groups are  concerned that the present Council, which was established by Executive Order by  Governor Spitzer, may expire when a new governor is elected. The Greens have  been disappointed by the lack of progress by the Food Policy Council to date,  which is one reason it supports the creation of an Advisory Council. Food Policy  Councils convene a wide range of stakeholders to discuss how to create a  sustainable food system while addressing related issues such as support for  farmers and the elimination of hunger.

Hawkins criticized  Democratic lawmakers for cutting the already low funding in the state budget for  farmland preservation by 51 percent. In New York State a farm is lost to  development every three days.  More than 70 percent of the fruits,  vegetables and dairy products produced in the country are grown in metro areas  and are at risk of being lost to unplanned  development.

Hawkins acknowledged that a critical challenge  for NY is to ensure that dairy farmers, as the largest segment of the state’s  agriculture system, receive more economic support (e.g., higher price for milk,  subsidies for their inputs). NY, the third largest dairy state, has 7,200 dairy  farms with more than 678,000 cows. One solution is to help develop more local  brands for milk as has been done in Connecticut. Another solution is for the  state and local government to set high standards as to the amount of local milk  and other dairy products they purchase.

Hawkins said he was  disappointed that the Paterson administration has not yet set standards for the  government purchase of locally grown and organic foods under the Sustainability  Executive Order for state contracts issued by Governor Spitzer. New York City  also needs to promote more leadership in establishing standards for local foods  since they serve more than one millions per day.

”Nationwide, our food  system is dominated by corporate agribusiness and unsustainable practices that  threaten our health, food security, degrade the environment, destroy rural  communities, and squeeze out family farmers. Our so-called cheap food comes at  the expense of the exploitation of our farmers and farm workers along with the  oppression of developing countries, inhumane treatment of animals, pollution of  air and water, and degradation of our land. We need instead to focus on building  local food systems. Local farmers producing food for their neighbors build local  ownership of the businesses, engage in values-based local food trading, create  both jobs and new income, restore the environment, and provide us with the  sustenance we need to maintain our personal and our community health,” Hawkins  noted.

Hawkins said he supported fair contract legislation modeled  after that in Iowa so that farmers who have to sell to large corporate entities  can associate with other farmers to bargain as groups, have the right to share information about the contract offered by a company with family, lawyers and other farmers, and have support in appealing unfair decisions by the corporations they sell to.

Pointing to the recent recall of 500  million eggs due to salmonella contamination and other recalls due to the  pollution- and disease-prone factory farming by large agribusiness corporations,  Hawkins he supported the rapid phase-out of CAFOs (confined animal feeding  operations) in New York State and the creation of more in-state small-scale meat  processors to process livestock from small-scale farms.

The Green  Party believes the goal of food, farm, and trade policy should be a globally  sustainable and adequate supply of wholesome food at affordable prices. A family  farm system is the most effective means to provide safe and quality food,  diversity of production, equitable social and economic opportunity, and  preservation of land, water, and bio-diversity. Family farmers, farm workers,  and food processing workers produce a necessity of life; they deserve dignity,  justice, and equity rather than exploitation for corporate profit. Corporate  livestock and dairy production gain competitive advantage using cheap grain and  oilseeds to the detriment of diversified family farmers who maintain crop  rotations and recycle animal waste as crop nutrients. Labor intensive fruit and  vegetable production shifts to countries where workers have few rights and are  paid $4 per day, causing unemployment and low wages for U.S. farm  workers.

The Greens have also been calling for a radical overhaul  of the federal Farm Bill, shifting from primarily helping large corporate  absentee farmers to focusing on helping small farmers, rural development,  sustainable environmental practices and better nutrition / anti-hunger policies.  The Greens also believe that one of the goals of immigration form should be to  provide undocumented farm workers with a path to citizenship and protection from detention and deportation without due process.

Colia Clark, the  Green Party nominee for US Senate against Schumer, added, “As I will work to  bring home the bacon for small and medium farmers in New York state including  returning to a common sense educational curriculum which trains and prepares all  youth in food production and agribusiness practices. The US Congress must play a  major role in making sure that the funds necessary to reclaim our agriculture  sector for American families and communities away from huge agriculture  corporations is made available. It is also urgent that any legislation for  farmers in New York State include critical protection for farmer workers  guaranteeing them fair competitive wages, right to organize, full health care  and decent housing.”

Below are some of the additional proposals  advanced by the Green party nationally to reform the nation’s agriculture  system. (List below compiled by Denis Spisak, Green Party of Ohio Nominee for  Governor)


Safe, local and organic food for  all


Biodiversity and the Environment