Green Party leaders call for a moratorium on nuclear plants 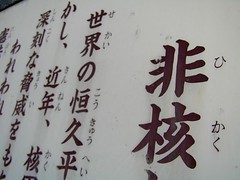 Green Party insists that the Fukushima catastrophe quashes the myth

that nuclear energy is a safe alternative

US Greens send a message of sympathy and solidarity to the Japanese Green Party, urge monitoring of radiation in the US and availability of potassium iodide pills for young people in Hawaii, Alaska, and the west coast in the event of a radiation plume from Japan

WASHINGTON, DC -- US Green Party leaders urged a moratorium on nuclear power plants and cancellation of license renewals for 23 General Electric reactors in the US that have the same design as reactors in Japan.

Greens also called for a close monitoring by US agencies of radiation levels throughout the Pacific and along the west coast, with accurate information published about any radioactivity discovered in these areas, especially in farm produce and other food supplies. In the event of radioactive emissions from Japanese nuclear power plants damaged by the tsunami, Greens said President Obama must authorize public health agencies to make potassium iodide pills and filtering masks available for young people in Hawaii, Alaska, and the west coast of the contiguous states.

"After the Chernobyl disaster, cancer rates spiked in the Soviet Union and Europe when the radioactive plume from a nuclear reactor meltdown spread thousands of miles. Potassium iodide pills protect people from cancerous radiation and they're not expensive. If there is any hint of a threat to our children, this is a step worth taking," said Audrey Clement, co-chair of the Green Party of the United States.

According to the book "Chernobyl: Consequences of the Catastrophe for People and the Environment," published by the New York Academy of Sciences in 2010, the Chernobyl radiation affected the entire northern hemisphere (http://www.ens-newswire.com/ens/apr2010/2010-04-26-01.html).

"The Fukushima power plant catastrophe should deflate the myth that nuclear energy is a safe, clean alternative to fossil fuels. In February 2010, President Obama announced a $5.4 billion loan -- really a subsidy -- for a nuclear plant in Burke County, Georgia, with taxpayers assuming 80% of the financial risk. Nuclear power plants are so expensive and inherently dangerous that private companies won't invest in them, so the nuclear industry forces the public to foot the bill and to guarantee their profits. We need a permanent moratorium on nuclear power plants and a deactivation of nuclear plants near earthquake faultlines and other unstable areas in the US and eventual decommissioning of all such facilities," said Michael Canney, co-chair of the Green Party of Florida, who has led efforts to stop a proposed new nuclear plant in Levy County, Florida (http://gp.org/greenpages-blog/?p=2143).

Greens noted further that insurance companies have acknowledged the dangers posed by nuclear power plants, including vulnerability to natural disaster and sabotage, and have been exempted from insuring such plants under the Price-Anderson Nuclear Industries Indemnity Act. Hundreds of spent fuel pools across the US remain a serious danger to public health.

On Sunday, March 13, the US Green Party's International Committee (http://www.gp.org/committees/intl) sent a message of condolence and solidary to the Green Party of Japan. The message was addressed to Japanese Green leaders Shuji Imamoto and Satoko Watanabe and signed by International Committee co-chairs Marian Douglas-Ungaro and Justine McCabe and US representatives to the Global Green Network (Romi Elnagar, John Rensenbrink, and Bahram Zandi):

"On behalf of the Green Party of the United States, we extend our deepest sympathies and concern to the victims of the earthquake, tsunami and nuclear power plant disaster in Japan. With great sorrow, we also acknowledge that Japanese Greens' warning against the dangers of nuclear power has now become a reality. We stand ready to aid our fellow Green Party members and the people of Japan in whatever way we can." (http://www.gp.org/committees/intl/statement-on-japan.html)

"Greens call President Obama's resurrection of nuclear power and handout for Georgia nuclear reactors his 'worst idea yet'," February 18, 2010 press release from the Green Party of the United States (http://www.gp.org/press/pr-national.php?ID=297).