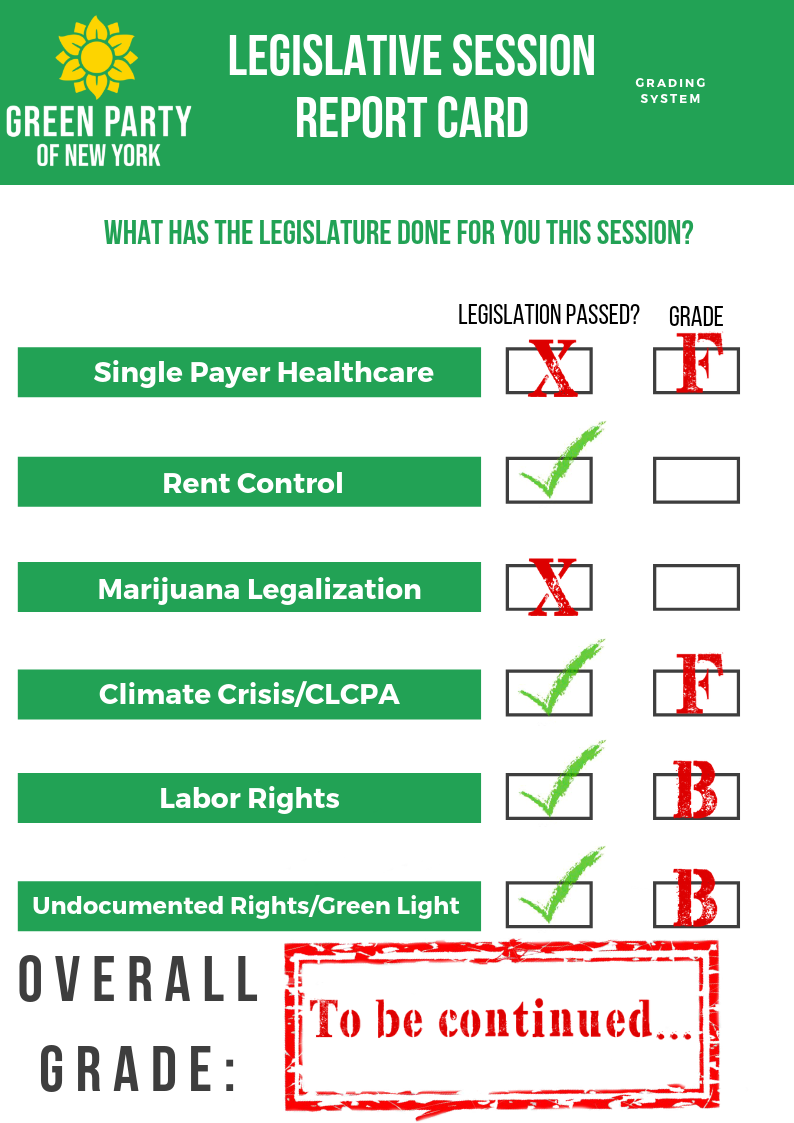 The bill is undeniably an important step forward for New York farmers’ basic rights, both for their ability to control their own work, as well as humanistically in regard to how we treat those that produce and cultivate one of the foundations of our society. The legislation grants farm workers the right to overtime pay (at least one-and-a-half times the laborer's regular rate of pay), a day of rest (twenty-four consecutive hours) per calendar week, unemployment benefits, and, perhaps most significantly, the right to collectively bargain through a union. The importance of these provisions cannot be stressed enough. Until the passage of the FLFPA, farm workers were excluded from the vital protections granted by section 703 of the New York State Labor Relations Act, including:

“The right of self-organization, to form, join, or assist labor organizations, to bargain collectively through representatives of their own choosing, and to engage in concerted activities, for the purpose of collective bargaining or other mutual aid or protection, free from interference, restraint, or coercion of employers.”

As the NYCLU points out, affording farm workers these basic labor rights is not only the correct and humane position, but is of greater moral urgency than ever before, given how the general productivity of New York farm workers continues to skyrocket, reaching over five billion dollars in 2016. In fact, cash receipts from the state’s agricultural exports roughly tripled from five-hundred million dollars in 2000, to 1.5 billion dollars in 2016. Over this time, New York has become the leading yogurt and cottage cheese producer in the country, with dairy and milk production alone responsible for 26,000 in-state jobs, while remaining the second leading producer of apples, snap peas, and maple syrup.

Yet, though New York’s agricultural productivity has drastically increased, a 2007 study conducted by the Bard College Migrant Labor Project shows this increase in productivity has not been enjoyed by the workers, themselves. 60% of the New York farm workers surveyed reported they earned little more than the minimum wage, working at least sixty hour weeks without overtime pay, with roughly 40% reporting they needed to work multiple jobs, such as construction, just in order to meet their subsistence needs. Even including this pool of laborers with supplemental income, roughly 90% of those surveyed had gross annual incomes below the U.S. Federal Poverty Guidelines for a family of three.

The FLFPA represents an enormous win for the furthering of farm workers’ rights, and will play a large role in helping to revert the exploitative systemic trends previously listed. Yet, it is also important to be clear-eyed about what gains were made, and how they were made, because although this is a leap forward for labor rights, there remains serious work to be done. First, the FLFPA grants that:

“No person or corporation operating a farm shall require any employee to work more than sixty hours in any calendar week; provided, however, that any overtime work performed by a farm laborer shall be at a rate which is at least one and one-half times the…regular rate of pay.”

This is a rather lacking provision – to put it mildly – given that the eight-hour workday/forty-hour week has been the bench standard for overtime pay under federal law for roughly eighty years. This means New York farm workers will continue to labor roughly twelve-hours per day, perhaps more given the twenty-four-hour/“day-off” provision of the FLFPA, without any overtime pay. This fails to meet the basic standard of giving New York farm workers equal labor rights akin to workers in different industries. A forty-hour week should have been the baseline consideration of any such labor rights bill, especially given the particularly harsh, back-breaking conditions farm workers are subjected to on a daily basis. Antonio, a local New York farm worker, spoke to The New York Times in 2014:

“‘Why are we as workers not deserving of overtime?’ he asked. ‘If it is raining and [the] farmer wants production, he makes us work in the rain. If the temperature surpasses 90 degrees, we’re there working. I see in other industries there are workers in lighter jobs that are not exposed to the conditions we are exposed to and yet they’re entitled to overtime.”

This was said long before the recent passage of the FLFPA and its overtime provisions, but the sentiment still stands: why are farm workers only deserving of overtime pay after sixty-hours of toil, and not forty like the vast majority of other professions? Are they less worthy? Is their labor simply less valuable? No, instead the reasons are structural. Farm labor (and, more generally, labor centered in the U.S. South) were left out of the New Deal suite of laws that enshrined many of the worker benefits and rights many take for granted. That disparity is perpetuated by the lobbying machinations of a disproportionately powerful, conservative Farm Bureau – an organization that, between 2001 and 2011, donated sixteen-million-dollars respectively to congressional and state level candidates, and has sued the EPA – intent on “[leading] the charge for industrial-scale food production,” and protecting the stock prices of its insurance affiliates, namely large multinational food industry/agribusiness conglomerates such as Cargill, ConAgra, and Dow Chemical. A reduction in working hours to a more humane level would terrify the boards of directors of these companies, shaking their confidence in future profits, and tanking their stock values, leading to huge potential losses for the Farm Bureau.

And, this is how modern capitalism works. As Thorstein Veblen argued in his seminal work Absentee Ownership: Business Enterprise in Recent Times, the incredible, inordinately productive forces of the working class are dependent upon the ephemeral financial asset values of the capitalist class, rather than on the productive capacities of the workers themselves. Thus, working hours for our local farm laborers are not decided based upon productive needs, but upon securing the confidence of future on-paper profits, thereby artificially inflating the values of financial assets.

Further, the FLFPA grants farm workers no right to strike, instead designated any such activity as an “unfair” labor practice. Section 704-b of the bill reads: “It shall be an unfair labor practice for a farm laborer or an employee organization representing farm laborers to strike any agricultural employer.” And, perhaps even more draconian than this, the bill defines the term “strike” not only as a “stoppage of work,” but also as any “concerted slowdown” of production by workers. This is a carry-over from one of New York’s most infamous labor laws still in effect today, the Public Employees’ Fair Employment Act, colloquially known as the Taylor Law. This piece of legislation enacted in 1967 similarly grants New York public workers the “right to organize,” but denies them the very foundational tool this organization provides: the right to strike. In both of these instances, this measure is meant to appease the owner class – to ensure that, regardless of rhetoric and/or appearances, capital shall always retain priority over labor in the eyes of the state. The worker, the “temporary denizen” of the private company/corporation, may not, under any circumstances, disobey the orders of their renters, and this, we are supposed to accept, is simply the naturalistic order of the world. Any disruption to this order is a threat, and must be treated as such by both capital and the state. It is vital to remember in cases like this that the strike is the most important tool of workers’ justice and liberation, and that any legislation that does not recognize this tool as a right to be utilized in the pursuit of justice is a compromised vision of a “friendlier” remedial capitalism at best.

The New York legislature also recently passed the Driver’s License Access and Privacy Act, informally known as the Green Light bill, restoring undocumented immigrants’ right to obtain driver’s licenses. This is important in two respects: both specifically because it is estimated that a large portion of New York farm workers are undocumented and generally, given all the other varied jobs/industries in which undocumented migrants work in New York. This is also undeniably a positive piece of legislation: we should, at the very least, provide people, regardless of status, with the ability to transport themselves to and from their places of employment. This is quite obviously (almost to the point of absurdity) a baseline consideration for any functioning society, and its absence from New York law up until now is yet another testament to the irrational and intense foundational immorality and xenophobia lying at the heart of our culture.

Yet, to narrow in on a key phrase: the Green Light bill restores this right to undocumented immigrants – a similar law was actually already on the books prior to 2001. This is indicative of how progress, particularly “progressive” progress, works in the United States: one step forward, two steps back. For, as great as this bill is, without a fundamental shift in capital-labor relations, it will be utilized for exploitative measures. Heather Briccetti, the President/CEO of The Business Council of New York said this of the bill: “We are pleased to see that State and private companies stand to benefit from increased economic activity, as those who want to obtain a license…can do so by paying the same fees and insurance costs as all other New Yorkers.” And, she’s right – the majority of the benefits from this bill will likely go to large private companies, many of them the same businesses that, in conjunction with the state, practice tyrannical measures that push their workers to the point of strike without ever acknowledging their right to engage in such behavior.

This is not to say that these are not worthy measures in-and-of-themselves, because they are – both pieces of legislation will help working people in their struggles. But, without restructuring how our economy works – i.e., without shifting toward the administration of worker-owned/run co-ops or similar enterprises as the foundation of our socioeconomic structures – these and other such legislative measures will remain compromised band-aids on much larger problems that split their benefits between the exploited and the exploiters – especially when they fail to recognize the right to strike. It is important that we recognize the immediate value of both the FLFPA and the Green Light bill, but it is also equally important that we strive for, demand, and organize around true workers’ justice from capital. Compromises between the state, capital, and labor last only so long, and remain in constant danger of repeal as we witnessed with the New Deal and its partial destruction and heavy dilution throughout the current neoliberal era. We applaud the New York legislature for their work toward fostering a more pro-labor state, but we also demand that workers take the priority over capital, rather than simply remaining as tools to be treated decently in the service of private accumulation and exploitation.