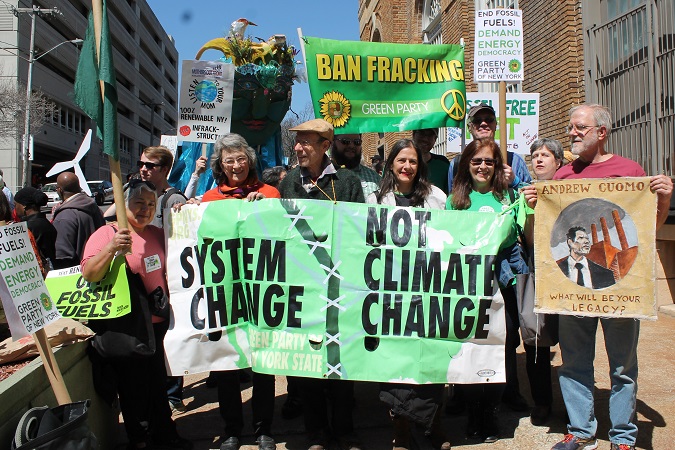 Green party members were among those who participated in civil disobedience on November 16, 2019 calling on Governor Cuomo to shut down the Cricket Valley fracked gas power plant. Read the press release. More info at: https://stopcricketvalley.org/

Greens participated in the September 20-22, 2019 global strikes for climate and peace.

Greens participated in an April 18, 2019 rally and march across the Brooklyn Bridge to stop the Williams pipeline.

More information about this campaign is available at the NYC chapter of Surfrider Foundation.

Greens held a lobby day May 21, 2019 aimed at making a fossil fuel-free New York a reality by 2030 with a REAL Green New Deal! Greens joined other ecosocialists and environmental justice activists in Albany to hold state legislature representatives accountable and to support the NY Off Fossil Fuel Act (Assembly Bill 3565).

Greens testified at State Senate hearings across New York State during February 2019 on legislation to address the climate crisis, specifically how to strengthen and improve the Climate and Community Protection Act (CCPA). They called for a climate bill that incorporates the strongest and best provisions of all the climate bills that have been introduced, noting that climate legislation should be combined with economic justice legislation as part of a broader Green New Deal. They emphasized that climate science indicates that the proper goal for reducing greenhouse gas emissions should be the elimination of new fossil fuel infrastructure and a move to 100% clean, renewable energy production by 2030.