Protect Our Ballot Line! Never Sign for Opportunity to Ballot 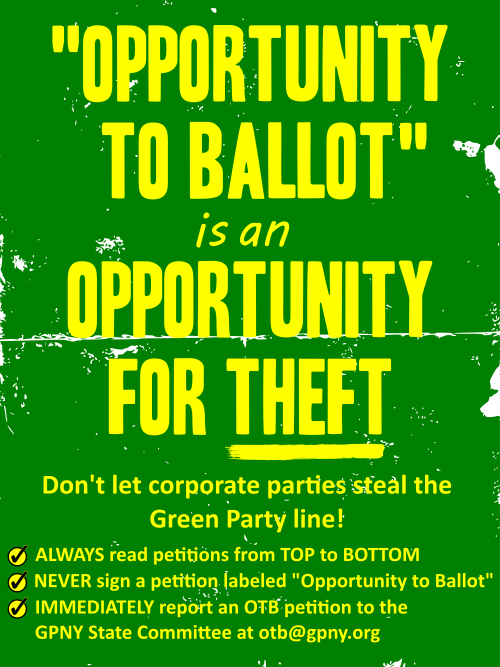 It's that time of year again, when exciting Green candidates are collecting signatures to run for local office. But this is also a time when political hacks from the 1% parties try to steal our hard-won ballot line through a legal-but-perverse process called "Opportunity to Ballot" -- but you can help keep the good name of our party safe!

Opportunity to Ballot (OTB) can occur if the Green Party does not have a candidate for a particular office. That is fairly common, as we are still a growing party and many offices are up for election each year.

A candidate who wants to hijack our party line will hire someone to collect OTB petition signatures from registered Greens. In many places, only a handful are necessary. That opens up a write-in slot for the Green Party nomination for the office on Primary Day.

Here's the problem: ANYONE, no matter what their party affiliation is or what their political beliefs are, can then be written into that primary vote and become the "Green Party candidate" in the general election.

Often, these write-in ballots can be won with a few votes, as many Greens won't even be aware of the primary!

So How Can We Stop OTB Theft of Our Ballot Line?

- If someone asks you to sign an OTB petition, don't do it! Even if it's for a so-called "good Democrat." Even if the petition is circulated by a fellow Green. Only sign designating petitions for named Green Party candidates for elected office.

- Read every petition from TOP to BOTTOM to make sure it is not for OTB.

- Have you been approached to sign an OTB petition? Tell us immediately by emailing otb@gpny.org, including your county, the office up for election, and who you think might be behind the petition.

- Visit your county board of elections office after July 16 and ask if anyone has filed an Opportunity to Ballot petition for the Green Party ballot line for any office up for election.