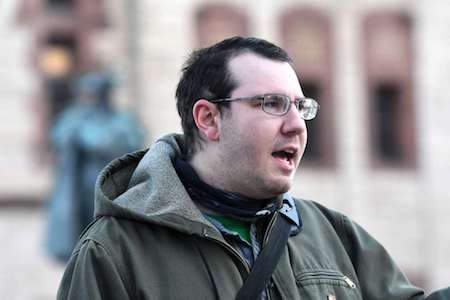 On Presidents Day and World Day of Social Justice, Monday, February 20, at 5:00p.m. in Academy Park, across from City Hall, Dan Plaat announced his candidacy for Mayor of Albany as a member of The Green Party.

As far as Economics, Albany simply has not taken steps to ensure the development of a sustainable economic plan for the city. We just keep going further into debt while failing to address social justice and quality of life.

As far as Environmental concerns, Dan will address climate change, water quality, resource protection and sustainability, and how the built environment can be designed to be environmentally conscious.

Dan respects the efforts of all those he expects to be running for mayor and recognizes that they believe they are doing the right thing. There is no need to attack each other, only to offer better solutions. Dan will be running a positive campaign, avoid a negative tone, and indeed conduct as non-competitive a campaign as is possible.

When it comes to Social Justice, Dan will vehemently defend civil rights and human rights and will work for Election Reform, and to realize a city based on The Politics of Equity and Empowerment.

Education is also very important to Dan. A good education, after all, in Albany schools, is where Dan first learned how important politics are, and his own education is a continuing process in which Dan is always learning and developing new ideas. Education must be dynamic and purposeful.

As far as Dan's background, he is a lifelong Arbor Hill resident. Dan has been a full time member of the Albany activist community for several years now. He received his education at CUNY, getting his degree in architecture and studying urban design and city planning. Dan stands firmly behind a commitment to a long term vision for the city.