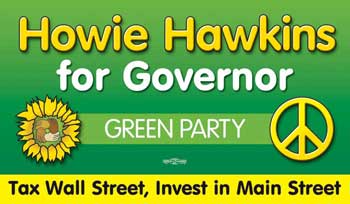 "The people of New York need someone in Albany who will stand up for Main Street and Martin Luther King Blvd., rather than someone bought and controlled by Wall Street. A million New Yorkers need a living wage jobs now. My campaign will show how we can fast track their creation," said Hawkins, a member of the Teamsters Local 317 who unloads trailers at UPS in Syracuse.

Hawkins said that he would transform unemployment offices into employment offices, where out-of-work New Yorkers could get a living wage job in public works or services when they can't find work in the private sector.

Hawkins also congratulated the other candidates who were nominated for statewide office for the Green Party. Gloria Mattera, long-time peace activist from Brooklyn, was nominated for Lt. Governor. Mattera, who has run for Brooklyn Borough President and City Council, is a health care worker active in the single payer Medicare for All movement.

Colia Clark, a long time social justice activist from Harlem who is presently working on self-determination for the Haitian people, was nominated to run for the US Senate for the seat presently held by Schumer. Cecile Lawrence, who has been active in the movement against hydrofracking and other health issues, will run for the Senate seat to fill out the term of Hillary Clinton (Gillibrand was appointed). Julia Willibrand, a long time environmental leader from Manhattan, was nominated to run for State Comptroller, a position she received 117,908 votes for 4 years ago. The Green Party needs 50,000 votes for Governor to regain its status as an official ballot access qualified party.

Promising to "tax Wall Street in order to invest in Main Street,” Hawkins said, “The state fiscal crisis is contrived by the politicians of both parties to benefit their Wall Street backers. They had the money and gave it back to Wall Street. The $16 billion in stock transfer tax revenues last year would have wiped out the $9 billion deficit and left $7 billion for public schools and colleges and investing in a sustainable green economy to create new good jobs.”

Calling “public enterprise in key areas a necessity to get the economy moving again,” Hawkins said he would campaign for single-payer health care for all, public power utilities, and a state bank to target new productive investments into a sustainable green economy based on renewable energy, mass transit, sustainable agriculture, and green industries. The state bank would also refinance mortgages on affordable terms for the tens of thousands of New York homes facing foreclosure.

Hawkins has previously been the Green Party candidate for US Senate and State Comptroller. He has run for Congress and local offices in Syracuse, receiving 41 percent of the vote in his last race for city council in 2009. The Green Party is committed to ecology, grassroots democracy, nonviolence, and social and economic justice. The Green Party has 22,939 enrolled voters in NYS.
Green_party_of_nys Lt_governor news
Do you like this post?
Tweet