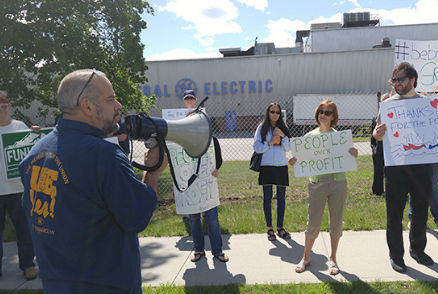 Not so long ago, the Green Party wasn't drawing much serious attention in the North Country. Nationally, the party that embraces grassroots economics and strong environmental policies has struggled to win votes.

In 2012, a Green candidate here in the 21st district House race drew fire for making anti-immigrant comments on the campaign trail. Don Hassig was eventually disavowed by his own party.

But that's all changed. Especially in the area around Glens Falls, the Green Party appears to be sinking real roots, running stronger candidates building what may be an enduring base of support. That's likely to shake up this year's congressional race in the North Country.

A baker and a catalyst

The spark for this change is Matt Funiciello, who owns a bakery where he makes artisan break on the outskirts of Glens Falls. "These are our hearth ovens, both are from France," Funiciello said, while giving NCPR a tour a few weeks ago. "This one I like to say is the BMW.  Has a German burner unit in it that is fairly easy to fix and repair."

Funiciello sells his loaves to shops and restaurants and runs a cafe. The last few years, he’s also emerged as catalyst for a surge in Green Party activism here, running for Congress in 2014 and again this year. "So they’re looking for an alternative. Would it be me? You know, the communist guy who bakes bread?" He shrugged, smiled and said, "But a lot of them realize that I’m not a communist guy who bakes bread.  I’m actually more of a capitalist than anybody else in this race."

Two years ago, Funiciello won about 11% of the vote, not bad in this Republican-leaning corner of rural New York. He also drew strong endorsements from some of the region’s big newspapers. They backed him over the Republican and the Democrat. Funiciello won backing from national heavy hitters on the left like activist Ralph Nader, who ran for president as a Green in 2000. Nader came to Glens Falls, campaigning and raising money for Funiciello.  "Matt’s the only one really who is from by and of the district and has a business here," Nader said at the time.

This year, a deeper Green bench

What’s different this year is that Funiciello’s not alone on the ballot. There’s now a local Green candidate running for state Senate. And Robin Barkenhagen is running for the state Assembly as a Green in a race where there’s no Democrat. Barkenhagen is the only candidate on the left. "It’s been a struggle," he acknowledged. "It’s been obviously uphill for many years, but Matt made a big breakthrough and it brought a lot of us around to decide that we could organize and get things done this year."

Funiciello, too, is convinced that this is a year when more voters will go Green. He thinks Bernie Sanders' strength in the Democratic primary showed people want candidates who are more progressive and who won’t take money from big companies. "Corporations are not human beings," Funiciello argued recently, while leading a protest outside a General Electric plant in Fort Edward that is laying off employees. "The workers who are in this plant, who live here in Fort Edward, are human beings."

Funiciello was joined by Jill Stein, who is expected to be the Green Party's candidate for president. She thinks Greens can capitalize on voter anger over income inequality and international trade deals. "We’ve been told that third parties are small and they don’t count and they’re just spoilers. Well, that’s what they said to the abolitionists," Stein said.

The rise of the Green Party here does give Democrats fits. You hear the word spoiler a lot. The Democratic candidate for this House seat is retired Army officer Mike Derrick. "So I will try to tell people that a vote for Matt is a wasted vote, because Matt Funiciello will never be elected to Congress," he insisted.

It is still a long-shot for any of the Green candidates here to actually win their races. In the House race, Republican Elise Stefanik, is heavily favored to hold her seat.  But in this part of northern New York, it does appear that Greens have sunk real roots, establishing themselves as a serious part of the political debate.

For now, they say that in itself is progress.

Listen To This Story At: http://www.northcountrypublicradio.org/news/story/32162/20160704/green-party-rising-in-the-north-country