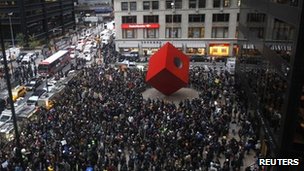 The Green Party of NY State has endorsed the Nov. 17 day of action called by Occupy Wall St. and the worldwide day of action, and it continues to stand by the Occupation movement.

"Nov. 17 is a day to let the banksters on Wall St. and their friends in the political ruling class like Mike Bloomberg know that we will no longer tolerate the vast inequality in our political, social and economic order. By clearing out Zucotti Park and 17 other encampments around the U.S., Bloomberg and his fellow elites have shown that they are deathly afraid of dissent against a capitalist economy that has created poverty and hardship for many, and power and wealth for the few," said co-chair Peter LaVenia. "Governor Cuomo has called for a $5 billion tax cut for millionaires; we call for collecting the stock transfer tax on the books and raising an additional $15 billion a year from Wall St. - the very people who started this mess."

"Mayor Bloomberg's actions were authoritarian and carried out like those in Libya, Egypt, against the occupiers of the Arab Spring. This protest will show we will not be silenced, and the reinvigorated left is not going away. You may be able to sweep away an encampment with your illegal tactics, but you cannot silence the movement," said party secretary Michael O'Neil.

"Our party represents grassroots democracy, social and economic justice, and nonviolence: exactly the ethics the Occupy protests have put into practice. We stand in solidarity with the protests, and just like the protestors, the Greens are in this movement for the long haul, until we begin to build a society based on real democracy and equality," stated party co-chair Howie Hawkins.