Green Party prepares for the 'Occupy May Day' General Strike

WASHINGTON, DC -- Green Party members will participate in the May 1 General Strike organized by the Occupy Movement and the 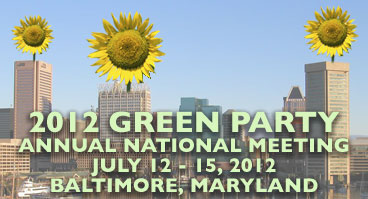 Web site of the 2012 GP-US Presidential Nominating Convention and

GP to Obama: The problem isn't just foreign oil, it's all fossil fuels

People's State of the Union: A Green New Deal for America

People's State of the Union: A Green New Deal for America from Jill Stein for President on Read more