Vote Your Values: An Interview with Rosa Clemente

By Adele Nieves at ZNet

Rosa Clemente is one of the most prominent activists of our generation. She Read more

Ten 60 and 30 second TV video ads by Cynthia McKinney. Mouse over the image to select a particular video

A Presidential Candidate Who Gets It on Immigration 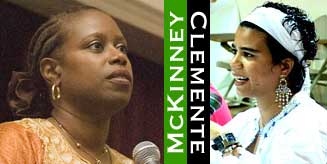 Week Day Until the Election

A Gift for a Generation: A U.S. Financial System of Our Own

Last week, I posted ten points (that were by no means exhaustive) Read more