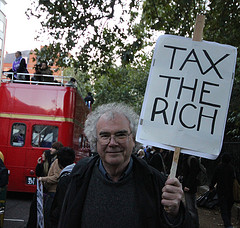 "Cuomo's budget is not about shared sacrifice. The people are forced to sacrifice. The richest 3% get more tax breaks. Cuomo is just recycling failed conservative policies of spending cuts and layoffs and tax cuts for the rich. It's for Wall Street and it will deepen the economic hardships on Main Street . Cuomo's budget is another version of the attacks on working families and unions that have given rise to massive protests in Wisconsin . We need similar protests here," said Howie Hawkins, the Green Party candidate for governor in 2010.

The Greens said that rather than merely extending the so-called millionaires' tax, the state should further raise taxes on the wealth to fully cover the projected deficit. The wealthiest 1% of New Yorkers now receive 35% of the income, up from 10% in 1980. It is tax cuts for the rich, not spending on schools and state workers, that caused the fiscal crisis, along with the recession, which income inequality makes worse. The last time the rich had so much of the total income in 1927, the lack of purchasing power by the working and middle classes plunged the nation into the Great Depression.


The Greens pointed out that both major parties were ignoring the Great Recession and unemployment crisis. The Greens said they would halt the annual rebate of $14 billion to Wall Street speculators and invest the stock transfer tax into a WPA-style jobs program to directly create 500,000 publicly-funded jobs paying $14 to $17 an hour.

The Greens also called for at least a 50% cut in the federal military budget in order to free up funds for jobs and other domestic needs. Taxpayers in State of New York will pay $49.6 billion for the proposed Department of Defense Budget for FY2012. NY has paid $113 billion for the wars in Iraq and Afghanistan .

The Greens said the budget deficit was a revenue problem, not a spending problem.

"The state's deficit was created by the $20 billion annual tax cuts for the wealthy enacted by state lawmakers since the mid-90s, combined with a Great Recession created by the financial misdeeds and greed of Wall Street and the real estate sector. Rather than holding Wall Street accountable for solving the mess they created, look at where Cuomo proposes to make cuts: reducing school aid by $1.5 billion, slashing Medicaid by $2.85 billion, $200 million from the MTA, nearly 10 percent of SUNY and CUNY's operating budget, specifically cutting back tuition assistance to low-income New Yorkers. Aid to towns and cities would fall by 2% - or nearly $32 million, and it's already 75% below what's required by law," stated Peter LaVenia, state party co-chair.

"Cuomo is giving wealthy New Yorkers a $5 billion tax cut by allowing the temporary income tax increases to expire. With the richest 1% getting 35% of New York 's income, how is this fair? The rich just got a massive tax break from Obama and Congress by extending the Bush tax cuts. We should recapture some of that tax giveaway to resolve the state's fiscal problems that the rich created.

"Why is the governor cutting aid to the homeless and welfare grant programs in the middle of a recession? Is he really that cruel or does he just not care?"

"We also notice Gov. Cuomo has decided to cut state operations funding for the Department of Environmental Conservation by $74 million. No restorations were made to the Environmental Protection Fund (EPF) after the 40% cut last year, on top of $500 million swept from the dedicated fund since 2001. With massive climate change in the offing, how can we afford to continue slashing the EPF?"

"The budget plan says nothing about ending the drug war - the single biggest drain on our prison system. Cuomo's plan will devastate communities around New York and shatter the dreams of many New York children who cannot otherwise afford to attend college. How are the choices made in this budget anything but a war on the poor?," asked LaVenia

"Nobel laureate economists Joseph Stiglitz and Paul Krugman, amongst others, have written endlessly on how we cannot cut our way out of a recession," said Hawkins. "The Green Party believes our budget goals must be focused on restoring full employment, high quality of life for New Yorkers, and crafting a democratically run economy.

The Green Party has better solutions for the proposed budget deficit:

1. Stop Rebating the stock transfer tax. Still on the books, the tax would raise nearly $15 billion yearly for New York . Wall Street created this mess, and Wall St. should clean it up.2. Single-Payer Universal Health Care. Instead of slashing Medicaid funding and increasing the number of uninsured and underinsured New Yorkers (an estimated 2.6 million), let us follow Vermont's lead and institute a single-payer health care system which will cover all New Yorkers equitably and release counties from the single biggest drain on their budgets, the Medicaid cost. A recent state funded study concluded a single payer system would reduce health care costs in NY by $28 billion by 2019 compared to the recently enacted insurance mandate.

2. Single-Payer Universal Health Care. Instead of slashing Medicaid funding and increasing the number of uninsured and underinsured New Yorkers (an estimated 2.6 million), let us follow Vermont's lead and institute a single-payer health care system which will cover all New Yorkers equitably and release counties from the single biggest drain on their budgets, the Medicaid cost. A recent state funded study concluded a single payer system would reduce health care costs in NY by $28 billion by 2019 compared to the recently enacted insurance mandate.

3. Restore the progressive pre-1980 income tax structure. The wealthiest 1% of New Yorkers receive 35% of all state income, up from 10% in 1980; in NYC they have 44% and pay only 33% of the taxes. The rest of us have gotten worse off. Restoring the tax structure would fill state coffers with an additional $8-$10 billion a year, and allow us to rebuild main streets across New York . Plus, it would give 95% of New Yorkers a tax break!

4. A Green New Deal for Full Employment. Instead of cutting employment, invest in public and cooperative businesses designed to stay in communities around the state and address the needs of the locality. New York lead the way in the 1930s and served as a model for FDR's New Deal. Massive public investment to sustainably re-develop local economies, especially upstate, will create a healthy tax structure and quality of life for all New Yorkers. Making businesses publicly or cooperatively owned means they will have an incentive to focus on community needs. Full employment via public investment will help rebuild communities and spark further economic growth.

According to Prof. Phil Harvey of Rutgers , a WPA style jobs program to create 500,000 jobs would cost about $14.3 billion - equal to the size of the rebate of the stock transfer tax. Wages would pay in the mid-teens per hour. Jobs would be tailored to meet the unmet needs of the community, such as child care, construction work (e.g., the rehabilitation of abandoned or sub-standard housing), conservation measures (e.g., caulking windows and doors in private dwellings), the construction of new affordable housing units, and parks improvements. The program also could expand and improve the quality of public services in areas such as health care, child care, education, recreation, elder care, and cultural enrichment.

5. State Bank. Create a state bank akin to North Dakota 's - which has remained in the black throughout the financial crisis - and have it help New Yorkers and towns hurt by the credit crunch. A public bank would provide the capital to revitalize low-income neighborhoods and towns hurt by financial mis-dealings.

6. Carbon Tax. Start collecting a carbon tax from polluters, and use the money to invest in renewable solar and wind technology. Some of the money should be rebated to consumers to offset the regressive nature of the energy tax.

7. Legalize and Tax Marijuana. We could make New York a leader in a new cash crop, bring in more than 60 millions of dollars in revenue. More importantly, we would stop filling our prisons with nonviolent offenders that are overwhelmingly people of color. Hundreds of millions of dollars would also be saved by adopting the proposals of the Correctional Association to close unneeded prisons and expand work release.