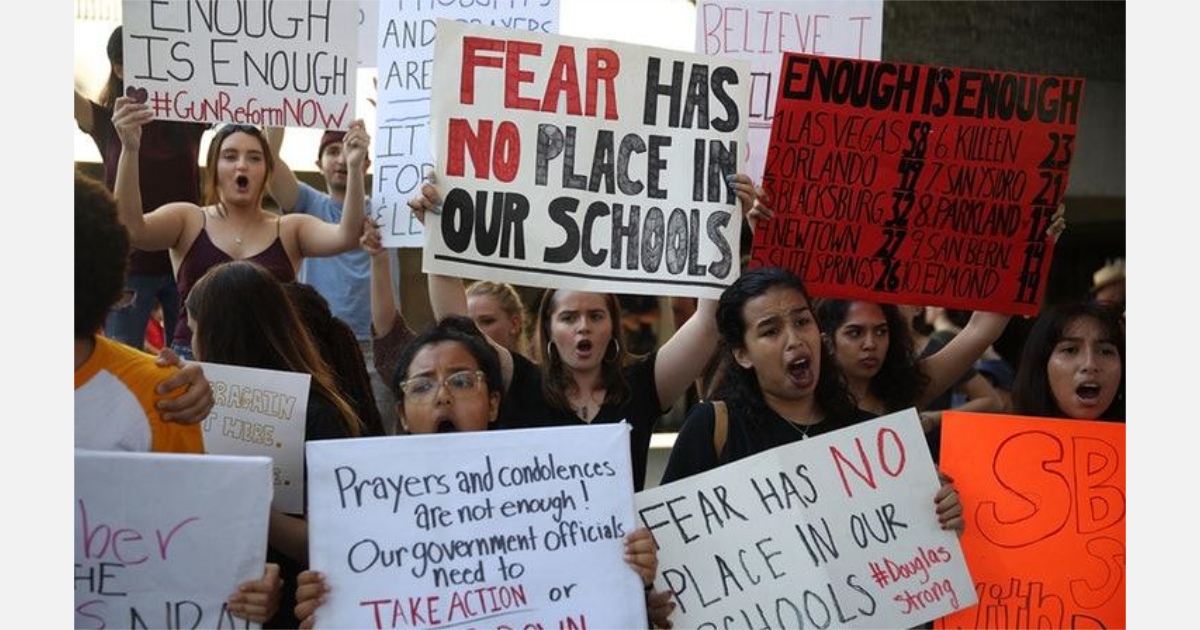 Today my sadness for those who continue to lose loved ones to preventable gun violence is accompanied by the pride I feel for my son Peter Sweeney and his fellow students at Brooklyn Tech High School for participating in today's historic, nationwide walkout for serious action on gun control.

They are now taking to the streets after a 17 min walk around their school! Some people questioned whether it was a safe idea for the students to continue on to Brooklyn Borough Hall (or, in the case of Manhattan students, Wall Street) but the reason they're out there is because they don't feel safe in their own schools. GPNY and progressive allies stand with their demand for real change!

In the wake of the horrific mass shootings at Marjory Stoneman Douglas High School in Parkland, Florida; the Pathway Home in Yountville, California; and the NRA’s lawsuit against the State of Florida , the Green Party of New York (GPNY) is calling for comprehensive action to address easy access to firearms and the inequality that leads to gun violence.

“The Green Party supports an immediate end to the epidemic of gun violence that has killed far too many of our children, neighbors and loved ones. With its lawsuit against Florida, the NRA has made it clear that it will stop at nothing to block gun regulation. We need to adopt common sense gun control laws now, just as other industrial countries have done to reduce the killings by guns. We need to elect officials who are not bought by the campaign contributions of the NRA and gun manufacturers," said GPNY co-chair Gloria Mattera.

“While we understand the desire of law-abiding citizens to pursue activities such as target shooting and hunting, we must also recognize that other industrial countries like the UK, Australia, Japan, and Germany have managed to enact sensible public policies that have resulted in far fewer gun homicides than the United States ,” added Mattera.

“Research shows that gun homicides are higher where economic inequality is greater and there are more guns per capita . So we need to address access to guns but we must also uproot the social conditions that breed gun violence by attacking economic inequality and insecurity, segregation and poverty, and barriers to opportunity, including access to mental health resources. The Green Party has long advocated for public jobs at living wages, single-payer universal healthcare, tuition-free education through college, abolition of student debt, a right to housing, and public financing of political campaigns,” said GPNY co-chair Peter LaVenia.

“We also need gun safety laws that are enforced without discrimination. We need to put an end to police brutality, the killing of unarmed civilians, and the United States being the world’s leading weapons manufacturer," added LaVenia.