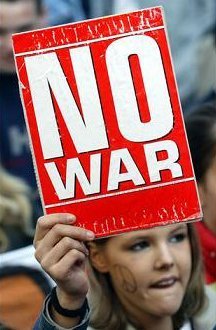 through Syracuse on Saturday, calling for an end to the U.S. wars in Iraq and Afghanistan.

The rally began at 1 p.m. at the Everson Museum of Art. It ended more than three hours later after a march of 1.6 miles to Walnut Park and another rally.

Blocks of SU students joined the chanting, singing, banner-carrying marchers as they came near the campus.

Three buses full of members of the SEIU 119 came from New York City and Boston.

John Burdick of the Syracuse Peace Council, an organizer, said groups came from New York and New England, with an estimated 2,500 to 3,000 in attendance.