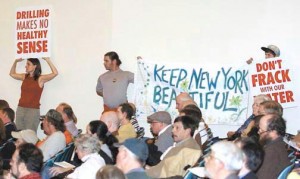 Acting on our concerns about the extensive environmental and health damages that are likely to be caused by drilling gas wells in the Marcellus Shale if horizontal drilling and high pressure hydrofracturing are allowed in New York State, the Steuben County Green Party adopted a resolution November 16, 2009, calling on the state legislature to adopt a ban on permitting gas wells that use these techniques. In so doing, the party joins the Green Party of New York and 63 other groups across New York State calling for such a ban.

The resolution lists the reasons why the party is calling for a ban:

Because of our concerns that environmental and health damages lasting long beyond our lifetimes will extend across New York State if gas drilling is permitted using horizontal drilling and high pressure hydrofracturing,

Because the infrastructure costs of building and repairing roads, water treatment facilities, and other public services needed by the gas drilling industry will exceed the economic benefit to local communities,

Because New York State has no laws restricting industrial scale water withdrawals from our rivers, lakes and aquifers,

Because the citizens of New York are not protected from the toxic effects of oil and gas drilling by Federal and New York State environmental laws that apply to other industries,

Because the subsidies granted to oil and gas drilling promote the use of fossil fuels and undermine the development of conservation, efficiency, and renewable energy sources, and

Be it resolved that the Steuben County Green Party calls on the New York State legislature to adopt a ban on permitting gas wells that use horizontal drilling and hydro-fracturing to release gas from tight sand and shale formations.