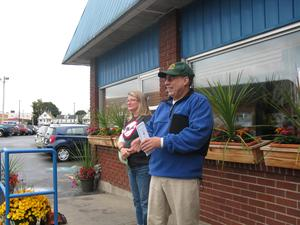 53-year old Green Party mayoral candidate was a late entrant into the race, has no political experience and didn’t switch party allegiances from Democrat to Green until earlier this year.

His new party represents 33 of the city’s roughly 29,000 registered voters. He hasn’t held a single fundraiser, while two mayoral candidates laid out a total of more than $100,000 on the Republican primary alone.

The flip-side, Clemente says, is that his party represents a nationwide groundswell against the political status quo.

The party’s state-level officials, meanwhile, say the Green Party took big steps toward legitimacy in 2010, when Howie Hawkins received more than 50,000 votes for governor and thus gave the party ballot status for at least four years.

And if Clemente prevails, he’ll have at least a few like-minded cohorts. Green Party mayors can be found in the New York state villages of Greenwich (pop. 1,819) and New Paltz (pop. 7,141).

“The goal is to win,” Clemente said. “We’ll see what the voters have to say, and we’ll move on from there.”

Clemente – who holds a master’s degree in secondary education and has taken doctorate classes in environmental studies – has taken a leave of absence from his job with a local home improvement contractor to concentrate full-time on the race.

He and roughly a dozen volunteers are canvassing the city for votes. He’s visible at the mayoral debates – preferring to speak loudly rather than use the microphone – and he’s visited the Occupy Utica protestors set up near Hotel Utica.