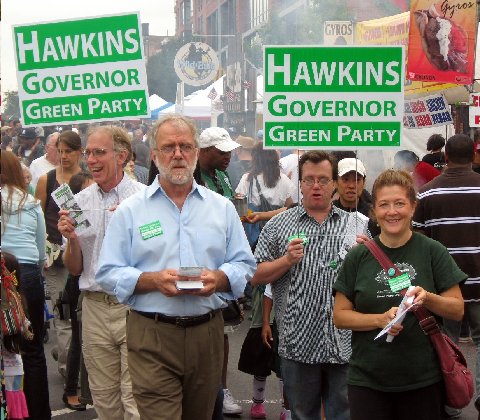 Howie Hawkins, the Green Party candidate for Governor, said today that he would help strengthen New York's urban areas with a massive public jobs program; strong tenant rights and affordable housing; increased funding for child care, education and other essential services; and enactment of a state single payer Medicare for All program.

"Cuomo just doesn't get it when it comes to grasping the magnitude of the problems facing New York. For instance, when it comes to jobs and the economy, Cuomo acts like Herbert Hoover rather than FDR. We are in the greatest recession since the Great Depression and Cuomo refuses to create public jobs. Instead he scapegoats unions and calls for property tax caps and a freeze on public spending," noted Hawkins.

Hawkins particularly faulted Cuomo for his weak proposals on affordable housing, including his failure to address expanded help for tenants. Cuomo's campaign has been heavily financed by NYC real estate interests.

"One of the biggest problems with housing, hunger and poverty in America were the devastating cuts that were enacted in federal housing programs at the beginning of the Reagan administration. This directly led to the creation of three thousand new emergency food programs in NYS, with many working families being forced to spend half or more of their income on housing. These cuts were not rescinded when Cuomo was head of HUD under Clinton nor have they been rescinded under the Obama administration. And they aren't going to be addressed by a new Cuomo administration according to his urban agenda," Hawkins noted.

The State’s continued promotion of suburban sprawl has left many upstate cities with thousands of blighted vacant structures that discourage investment and lower property values.  Hawkins said any plan for urban renewal must include a call for land use reform.  Moving land use decisions from local municipalities to an elected metropolitan/regional planning board would help end economically and environmentally destructive sprawl.

Hawkins said that, in addition to strengthening and expanding rent control and stabilization laws, he would propose a rent subsidy program for tenants. Hawkins also supports a moratorium of housing foreclosures until the questions of title are resolved and an effective mortgage refinancing program is in place. Hawkins would model his mortgage refinancing program on the Home Ownership Loan Corporation of the New Deal. Refinancing would reduce principal to pre-housing bubble prices and replace sub-prime high and variable interest loans with long-term, fixed-rate mortgages. Cuomo just wants to strengthen foreclosure prevention programs without getting specific.

Hawkins pointed that Cuomo wants to expand Summer Youth Employment programs by raising private donations, not public funding. Cuomo promises to study issues like Child Care and pre-k without agreeing to provide enough funding to expand the program to meet the unmet needs. His jobs program in nonexistent, especially in inner city communities with massive unemployment, is nothing but more of the same failed mixture of tax subsidies and handouts that hasn't worked for decades. Cuomo does support green jobs and job training, but again fails to make concrete commitments to expand them.

Hawkins in contrast has called for a WPA style jobs program. If the private sector can not provide a New York resident with a job, they can go to the local employment office and get a job helping to improve the community.

Cuomo fails to call for a hike in the state minimum wage. Hawkins believe it should be raised to at least $12 an hour. Cuomo says he wants to strengthen the safety net but largely limits it to food stamps while failing to commit to improve the local welfare system. Cuomo talks about the negative impact of transportation cuts, such as in NYC but fails to support increase funding for mass transit.

Hawkins said he would propose that the state comply with existing laws, enacted by Governor Rockefeller, to require the state to share 8% of its revenues with local governments, especially cities. The law was enacted to recognize the financial problems New York cities, especially upstate, face as a result of suburban flight and the reduced inner city property tax base. Unfortunately, every year the governor and lawmakers suspend Sec. 54 of the State Finance Law when they pass the state budget.

Hawkins would also empower cities to decide whether or not to institute a city income taxes and commuter taxes . New York Cities provide services during to the day to hundreds of thousands of suburban residents who come for the jobs but then go home at night to pay their taxes and spend their consumer dollars. This places a significant financial burden on cities to finance service for out-of-city residents. Cuomo is silent on such issues.

Hawkins also faulted Cuomo for failing to address the havoc caused in New York cities by the war on drugs, which has imprisoned a disproportionate number of young men of color. Nor he address the problem of racial profiling.

"Cuomo calls to export NYC's racial profiling efforts to the rest of the state, while supporting some expanded efforts to help offenders transition back into the community. We need instead to stop the filling of upstate prisons with inner city residents. We need to address the racism in our criminal justice system, and we need to commit to improved and expanded employment and education opportunities for city residents," added Hawkins.