Green Party of New York State Calls for Full Abolition of the Rockefeller Drug Laws, Legalization and End of War on Drugs 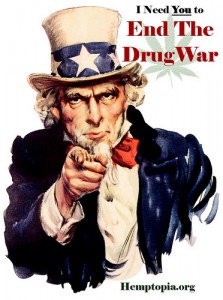 The reform of the Rockefeller Drug Laws proposed during the NY State budget negotiations is a welcome sign in the abolition of these exceedingly unjust laws, but does not go far enough, according to the New York State Green Party, whose 1998 gubernatorial candidate "Grandpa" Al Lewis was instrumental in helping publicize the Drop the Rock coalition in its early days. The party notes that although the proposed bill restores much judicial discretion in sentencing of drug-related offenses and displays a preference for treatment, it still ignores a good portion of the 12000 nonviolent drug offenders in New York prisons. It also does nothing to recognize that the so-called "War on Drugs" is a failed prohibitionist policy, and that the sensible option is to legalize, tax, and regulate drugs just like alcohol.

"The New York State legislature has a chance to chart a radically new course in U.S. drug policy, which would mean ending the war on drugs and legalizing them, and releasing all non-violent drug offenders in custody. This is recognized by the Green Party and groups as diverse as NORML and Law Enforcement Against Prohibition (LEAP). Instead it has decided to propose changes in sentencing procedures, which will do nothing to end the phony 'war.' This is an example of the Legislature and Governor Paterson patting themselves on the back for policies that are still badly misguided," said Gloria Mattera, secretary of the New York State Green Party.

"The proposals for which our legislators are lauding themselves would still oblige judges to impose jail terms on broad categories of non-violent offenders without any option of diverting them to treatment instead. Although estimates by the Correctional Association of NY show that up to 55% of current non-violent drug offenders might have been spared jail time with the reforms, that leaves at least 45% who would still be sent to prison. The Legislature and the Governor can do better than this," said Alice Green, executive director of the Center for Law and Justice in Albany, NY. "The 'war on drugs' disproportionately affects people of color. It's a fair assessment to say that the Rockefeller Drug Laws - all drug laws - are laws that contribute to the racism still endemic in our society. Black men are incarcerated at rates 6 times higher than whites, and Latino men 2 times higher than whites. Drug laws and enforcement targeting minority neighborhoods have led to this situation, and it's far past time to end it."

"Additionally, in this time of fiscal crisis, New York could use the tax revenue that legalized and state-regulated drugs would bring. Why aren't the Democrats in the Legislature bringing up a bill like California Legislator Tony Ammiano's, which would legalize and tax marijuana sales? Not only would legalization help alleviate New York's fiscal crisis, but ending arrests of nonviolent offenders and releasing those already imprisoned would be a blow at the phony moralism of the 'War on Drugs.' In a year where the governor proposed a tax on non-diet sodas and the Bottle Bill is set to pass, why not help New Yorkers shoulder the fiscal crisis by measures which simultaneously unburden them of unjust laws?" said David Doonan, the mayor of Greenwich, NY.