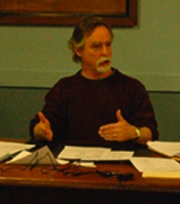 David Doonan was considering a run for public office last year, but not necessarily for Mayor. But when then Mayor Chris McCormick, was quoted in the local paper as saying "things are easier to get done when the public doesn't show up" Doonan knew he had to run. "That was really the turning point for me". Doonan said, "People felt like they were shut out of the process, that decisions were being made without public input". Doonan made Open Government the central issue of his campaign. It turns out that was the right focus. Doonan won the election with more than 70 percent of the vote. The incumbent, running for a Trustee position, garnered only 8 percent.

Since taking office on April 7th, Mayor Doonan has already lived up to his promise to make Greenwich, NY's government more open and accountable. He has instituted video taping of all Village Council meetings which will then be available on-line. He's also added a Mayors report so that the public knows what he does and what he is responsible for. Doonan, a freelance web designer (Doonan is webmanager for the Green Party of the United States), maintains a list of his clients on his campaign website. "Many elected officials in NY who have second jobs do not disclose who their clients are, leaving the potential for graft. Publishing my client list is one way to ensure transparency when it comes to awarding village contracts. This is one way to counter the traditional power structure".

Doonan says that building community participation and public service were central to his campaign and to his job as Mayor. "If I had won the Mayor's race, but had not persuaded others to step up and run for office, I would have considered it a failure. But I got two people to run, and they are now serving with me as Village Trustees". He's also convinced community members to join the zoning board of appeals.

Besides winning the Mayor's race, Doonan's campaign had the added benefit of creating a new Green Party local which meets monthly.

When asked what advice he has for prospective Green Candidates, Doonan stresses the need to focus on local issues that effect the community you're running in. "Not that you should hide from the larger issues, I kept a 'Bring the Troops Home' sign in my yard during my entire campaign, but find out what the local issues are. You won't win if you don't address local concerns. "Also, let them know who you are. My race was officially non-partisan, but I campaigned with a Green Party button the whole time. I never shied away from the fact that I was a Green Party member, the webmanager for the Green Party, and also a member of the IWW".

Doonan included a union bug at the bottom of his website. He thinks it is particularly important for Greens to include union bugs on their campaign materials. "If we want to get labor union endorsements, we need to show that we support organized labor".

Doonan received financial support for his campaign from both the GPUS Coordinated Campaign Committee's campaign grant program and the Green Party of New York.