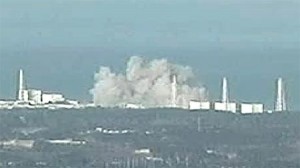 "We are horrified, but not at all surprised by this latest nuclear accident," said Denice Traina, a health-care worker residing in Augusta Georgia and former co-chair of the Georgia Green Party. "Fukushima has now joined Chernobyl and Three Mile Island as beacons to the human folly of boiling water with nuclear fission.

News agencies from around the world are reporting on a Saturday explosion at a nuclear plant in Fukushima, Japan which destroyed the containment building housing a nuclear power reactor, triggering a radiation leak. The disaster was set off by an earthquake which hit 8.9 on the Richter scale and the resultant tsunami. The explosion and resulting fire were caught on video and have been published to youtube.


Fact sheet on Fukushima reactors and aftermath of Japan earthquake, courtesy of the Nuclear Information and Resource Service.

"Greens in Georgia and elsewhere urge the administration to reverse itself on the insanity of using public assets to finance a new round of nuclear construction," said Adam Shapiro, Co-Chair of the Georgia Green Party, resident of Atlanta and a radio show host. "Private capital has known for years what a poor investment nuclear power is. If not for these taxpayer backed loan guarantees and the immunity from liability provided by the ill-advised Congressional Price-Anderson Act, the nuclear industry would have long ago succumbed to market forces."

Engineering firms and bond financiers still stand to make tremendous profits from the industry, if public tax dollars can be found to underwrite the failed technology. Heralding a new generation of safe nuclear reactors, fission is being sold as a 'carbon-free energy'. That can only be said if one ignores the tremendous carbon footprint of the nuclear fuel cycle. Greens urge investments instead in solar, wind and geothermal technologies which would harness the Earth's solar income, rather than tapping its fossile fuel savings.

"While Fukushima underscores the insanity of the Yucca proposal to store nuclear wastes over a fault line, the 1986 explosion in the Ukraine shows us you don't have to build a reactor on a fault line to incur these risks," said Traina, whose kids and grandchild all live within thirty miles of Plant Vogtle. Studies have documented nearly a million radiation-related deaths since the April 26th, 1986 Chernobyl disaster, which led to nuclear fallout and raised background radiation levels throughout the Northern Hemisphere.
Environmental_wisdom Green Green_party_of_the_u.s. Press_releases news
Do you like this post?
Tweet