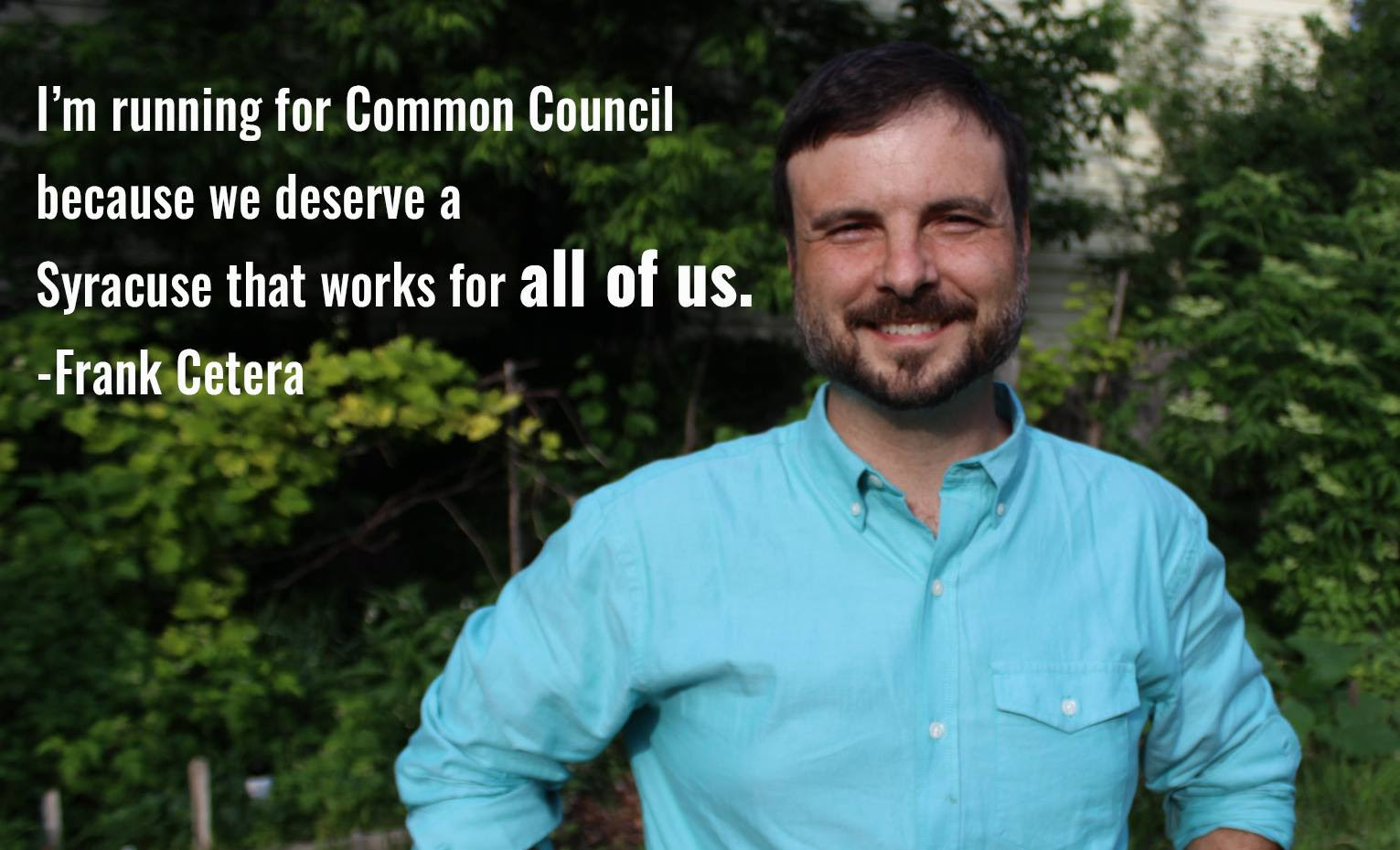 "The goal of city government must be to end poverty and create opportunities for all families to have a dignified life – with living wage jobs, fully funded schools and a responsive city government."

Frank Cetera is 44 years old and lives with his wife Ursula Rozum on Otisco St in the Near Westside neighborhood of Syracuse. He has worked as a NYS Certified Business Advisor with the Onondaga Small Business Development Center at Onondaga Community College since 2009, providing business development planning and analysis to small and medium sized enterprises. During that time, Cetera has accounted for the creation of 294 jobs, and the economic investment of $3,730,000 into the small business engine of our communities. In service to his fellow workers, he also serves as Professional Administrators' At-Large Union Steward for NYSUT Local 1845 OCC Federation of Teachers and Administrators, as well as Delegate to the Greater Syracuse Labor Council.

Cetera's additional experience includes the role of Board President of Cooperative Federal Credit Union since 2010, a Community Development Credit Union that manages $22 million in assets and that serves those in Syracuse neighborhoods that are underserved by traditional banking entities. Cetera has also helped lead the recent rebirth of the Tomorrows Neighborhoods Today community planning sectors as citywide Vice-Chair, and Chair of the strategic planning committee; as well as initiated and implemented numerous grassroots projects such as the 610 Gifford St Community Garden, the Near Westside's Adopt-A-Trashcan program, and the NY Cooperative Business Network.

Cetera received 21% of the vote for 2nd District Councilor in a 3-way race with an incumbent Democrat and a Republican challenger in 2015. Cetera also has experience working on Green Party campaigns dating back to 2010 as a canvassing volunteer, finance advisor, volunteer coordinator, website and social media manager, and office manager. Cetera was also a local organizer for the Hawkins for Governor campaigns in 2010 and 2014, where he helped the Green Party secure a ballot line for the next four years as they received over 50,000 votes in 2010, and 184,419 (5% of the vote) in 2014, enough to leap over the Independence and Working Families parties to take the fourth line on New York ballots.

"Many of my supporters have urged me to run At-Large due to my diverse experience with all quadrants of the city, having lived and worked everywhere from the North Salina St corridor and Hawley-Green, to the Westcott neighborhood, to the Brighton & South Salina St corridor, and the Near Westside. Having moved to Syracuse in 2006 for graduate school and stayed for the community, I truly feel like I am a citizen of the city as a whole, and among my current challengers I can best represent every residents' interests."