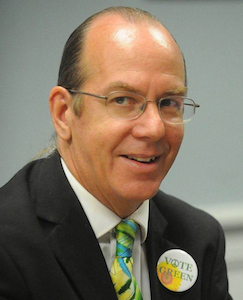 Glens Falls - Robin M. Barkenhagen, Green Party, is pleased to announce that he is running for the office of Glens Falls Common Council-at-Large. Mr. Barkenhagen, who ran for New York State Assembly from the 114th district in 2016 wants to build on the momentum created during that race, where he received nearly 1200 votes in the City of Glens Falls. “I’m excited about the opportunity to serve the public, and represent the people of Glens Falls” said Mr. Barkenhagen. “Being a member of the Green Party, I believe that I can bring a fresh perspective to the issues that we face in the City, while not losing sight of the fact that I need to represent the best interests of all our citizens’ he added. Mr. Barkenhagen is a Glens Falls business owner, Treasurer of the Warren County Green Party, Vice President of the Glens Falls Collaborative, and is involved in several annual fundraisers including “Play for Ray” and “Sing for Someone Else’s Supper”. Mr. Barkenhagen is heeding the advice of the Post Star, which wrote on 10/30/16; “He could better serve the people by serving on the local planning board or running for a seat on the Common Council”.